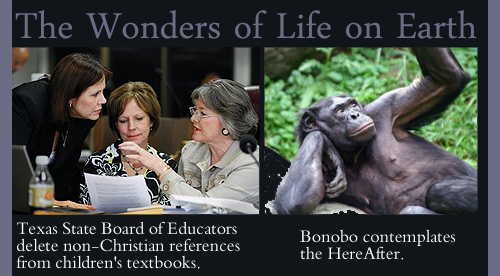 It’s been nearly a month since the complete bonobo genome was published, and it’s absolutely astounding how American creationists dispute the science.

This is the last of the great apes to be sequenced and completes a body of data that can significantly increase our understanding of human evolution.

Bonobos live in central Africa, an endangered primate now proved no closer to humans than chimpanzees. This first great discovery contrasts with primatologists’ presumptions based on anatomy and to a lesser extent, behavior, that had held bonobos were the closest of the great apes to man.

Confirmed is that great apes — chimps, bonobos, orangutans, gorillas and man — are remarkably closely related. This was never in doubt, at least not by rational thinkers. So the excitement of the genome is the evidence now being dissected that will more exactly draw the evolutionary timeline of primate divergence, and the possibility that complete genomes can provide evidence for behaviorial evolution.

The initial theories are pretty exciting. They suggest that the divergence between the common ancestor of all existing primates, including man, was as early as 4½ million years ago. This confirms further that quite a few stars of early hominid development, including the earliest Australopithecines, were not our ancestors, but divergent dead-ends from even earlier common ancestors to our common primate extant ancestor.

And much more interesting information is on the way. Such as the importance of rivers as effective separators of hominid evolution. Or whether the most successful hominid behavior is either “Make Love, Not War” or “Make War, Not Love” as the eminent University of Wisconsin scientist, John Hawks, told the Los Angeles Times.

But the sad story in all of this is how warped America has tried to deny the findings. The leading idiocy is from the heavily funded Institute for Creation Research.

Their resident “scholar”, a Ph.D. of no significance, Jeffrey Tomkins, berated the Nature article and all the corresponding good reporting about it as “misrepresented.”

In what even to this humble laymen was just plain dumb, Tomkins focused on the genetic difference that was shown to exist between the existing great apes, then tried unsuccessfully to extrapolate the notion that they are therefore not of the same stock (have no common ancestor).

As has been the case for the last several decades, scientists mostly ignore this stuff. But I did find one scientist, Ricki Lewis, whose personal analysis of the Nature paper specifically debunks Tomkins.

And has also been the case for the last several decades, Tomkins’ scientific-sounding article was picked up by literally hundreds of religious journals, which then propagated even more blatant misrepresentation and poor analysis of the facts. You can’t exactly call it a lie, but it’s very close.

Do a Google search on Tomkins’ article, and you’ll be amazed with the endless number of mouthpieces – all American – for this nonsense. It’s truly depressing.

Facts and science, today, are being cast aside by this quirky segment of America, and it’s one thing simply to call them out and move on. But we’ve tried that. And while fortunately polling is on our side, and scientific facts like global warming and evolution are miserably slowly making their way into the normal fabric of American life, the outlanders are tenacious and vicious.

So while the actual number of creationists may be slowly reducing, those that remain are getting more and more powerful. They are “cleansing” school textbooks of science, for example, and packing it with their nonsense.

Belief in the simply untrue leads people into weird behaviors, not least of which is voting against their own self-interest. So rejoice that the completion of the great ape genome project gives us so much complete science about evolution that it will be even harder to dispute.

But beware the powers amassed to suppress it. And not just because of the denial of evolution, but for the integrity of all science in America.