As the situation in southern Sudan stabilizes, neighboring Congo-DRC grows more unstable than ever. 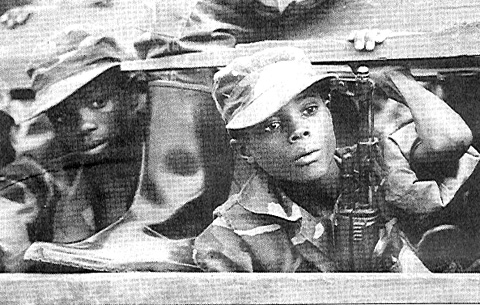 There is a long and fragile road to travel before next year’s independent referendum in southern Sudan which is likely to create a new and more stable country, but for the time being it looks peaceful.

And so it seems that some of the troublemakers have moved west. Yesterday, the UN reported more than 7,000 refugees fleeing out of the DRC at its northwestern border into Congo-Brazzaville. There has rarely been trouble here, in this area much closer to the capital of Kinshasha than the troubled Kivu province far to the east.

The Congo-DRC, formerly Zaire, never achieved real stability after the CIA assassination of its first democratically elected president, Patrice Lumumba, in 1961. Literally every day since then for nearly a half century this second largest country in Africa has been without a unified government, unstable and at war.

The area of greatest turmoil has until now been the eastern Kivu Province which borders Zambia, Tanzania, Burundi, Rwanda, Uganda and The Sudan. This is because it is so incredibly mineral rich, from precious tungsten to uranium.

These precious metals have come into your cell phone straight from this darkest spot in Africa, and your payments for minutes have bought AK47s, missile launchers and jeeps.

The longest stretch of this northeastern and eastern border is with The Sudan, mineral rich with oil. There’s really been no border here. This black hole on the continent has been the greatest den of iniquity Africa has ever seen.

This was the area where the Lords Resistance Army arose, where children were kidnaped and drugged then turned into killers.

It’s pretty far from Darfur, but in that whole long area northwest to Darfur it has been lawless and terrifying for three going on four generations.

Now that a generation of diplomatic efforts might be paying off in The Sudan, the Congo-DRC becomes the last haven for the African rebel with his assorted SAM missiles, refurbished Humvees and millions of rounds of ammunition.

The Congo is becoming a set for Bruce Willis, which is apt since this all started during the early days of the Cold War when America was worried that a democratic process in the Congo was turning communistic. Belgium gave the U.S. an important assist in crowning the terrifying dictator, Mobuto Sesi Seko, after assassinating the election victor, Tshombe, in 1961.

Mobuto held the republic together with terror, but never completely. As he was dying of cancer he was dethroned, and the so-called democracy which replaced him in 1997 has never taken root. Around the developed areas of Kinshasha it is fair to say a more reasonable society has emerged, but in the boondocks of this massive country all hell reigns supreme.

The Belgium parliament apologized a number of years ago and awarded sizable reparations. The U.S. never has apologized.

The moment’s current crisis shows that as peace progresses in The Sudan, the born African rebel is moving next door. And while destruction spreads west through the country like the cancer that eviscerated Mobutu, Kivu remains bloody, with 18,000 ineffective UN peacekeepers.

UN peacekeeping chief Alain Le Roy said Sunday that the U.N. would immediately cease support of the Congolese army’s 213th Brigade in Kivu. Le Roy said the U.N. believed the unit had killed at least 62 civilians in the Lukweti area, some 50 miles northwest of the regional capital of Goma.

This is where I used to guide tours. It’s where there were mountain gorillas, millions if not billions of neon-colored butterflies flitting into beautiful jungles, pygmies and giant waterfalls. Today, a generation later, none of these exist.

Human Rights Watch describes an August attack in Kivu in which it said soldiers decapitated four men and cut off their arms. They then raped 16 women and girls, including a 12-year-old girl, later killing four of them. Researchers also found that many of the more than 500 victims were women, children and the elderly.

Africa was not like this before the white man showed up, despite racist attempts to paint early internecine tribal battles as “wars.” War came with machine guns, not machetes. Most of the world’s weapons in Africa today were manufactured in the U.S., sold through Russia and distributed by Israel.

This is where terror was born. And now we fight it in New York.