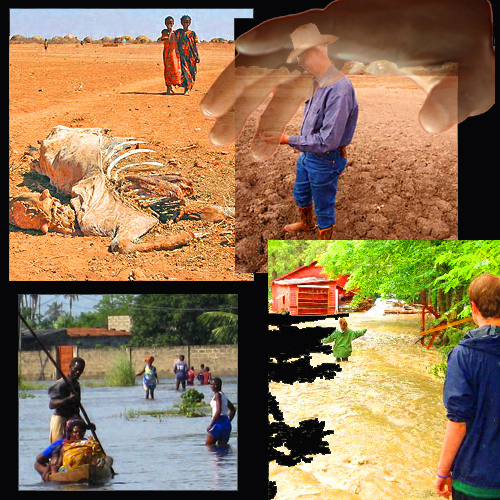 Texas droughts, Vermont floods, Manhattan hurricanes. Dadaab famine, Ewaso floods, Zanzibar typhoons. In America I expect we’ll muddle through and with luck and no feckless economy, we’ll figure it out. I’m not so certain about Africa.

The effects of global warming on East Africa have been severe for the last 5-10 years. The weird way the wildebeest migration is behaving this year in the Serengeti/Mara ecosystem is today’s news (more below) but the intensity of droughts in ridiculously localized areas, often surrounded by floods, has now become so common it hardly makes news, anymore.

And there’s a big difference between the Africans’ outlook on disasters and ours.

Africans don’t get quite as excited as we do. Although malevolent “Acts of God” are increasing it seems to me at an even pace worldwide, they’ve been much more a part of African history than American history. We in the west tended to denigrate the African psyche as fatalistic for shrugging off one famine after another.

But you know, you can grieve for that covered wooden bridge for only so long. So … who to help?

Animals are helping themselves. The huge wildebeest herd moved out of the grassland plains this year right on schedule at the end of May. This was because the weather in the area was right on schedule. The rains which begin with the new year had finally begun to subside.

The pattern over the last century has been like a wet spot on your cement floor drying up: in this case the center of the wet spot is Lake Victoria, and the rains and humidity recede into the lake as the dry season progresses. The wildebeest migration follows this drying spot.

But subside became abrupt in the western part of the ecosystem, in the area known as the western corridor. Before June was out, residents there were calling it another drought.

I’ve noticed in the last decade that the increase in human development which has stressed available resources like potable water exacerbates negative events. Perhaps it was a drought; perhaps it was just there wasn’t enough water to go around, or that domestic stock had nibbled into the park reserve, or that previous logging and erosion had lost a final defense.

A large portion of the original grassland plains herds normally moves into the western corridor in June, and as they did there were wide reports that they were surprised there was no grass, became confused, and began to scatter.

That’s a normal reaction to an abnormal obstacle on their trip.

As the herd sort of regrouped and moved north quicker than it would, many of them were crossing into the Mara by the beginning of July. Then, it started to pour rain, but mostly south of the border, south of the Sand River.

So, the wildebeest turned around and went back into Tanzania. The rains were good for about ten days. By mid-July there were appearances of it being a rainy season in the dry season.

This would never have happened in the normal days of the past so many decades. There would not be this extreme difference between areas which are so close to one another. If the western corridor was in a drought, the northern Serengeti shouldn’t flood. Yet that was almost what happened.

Today the wilde are mostly back in the Mara, and in fact many have moved into the private reserves north of the Mara proper. This is normal. Or at least, what used to be normal. The animals helped themselves; nobody gave them a handout or sign telling them where to travel. Perhaps a tenth of the herd was lost, but that’s life, and mothers don’t even linger over their dead babies.

If somebody’s home was floated away by Irene, do we just take pictures and leave? If millions are dying in Somali, do we just sell tickets to another pop concert?

Earlier this month the Kenyan Wildlife Service (KWS) announced it was starting a number of initiatives to combat climate change. Last week was the first of many scheduled workshops. There’s a lot of sincere interest in doing something, but it’s nearly impossible to imagine if anything at all can be done.

Human populations are increasing and stock grazing comes with that. Oil and other natural resource potentials are drawing Chinese and others with little regards for the environment. There are fewer traditional farmers and herders. I see more Maasai wearing Docker Polo shirts than shukas. Life is changing, and even more noticeable is the veld itself. It’s crusting.

The actual Mara reserves and the great Serengeti grasslands further south seem to be OK for right now. The last several years in particular have been kind to the Serengeti.

But things are changing. Climate change is pounding the earth. Some will be able to move to the new drumbeat. Some won’t.