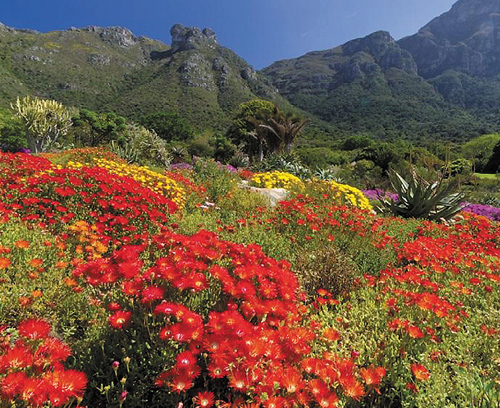 The floral biodiversity of The Cape is greater than the Amazon; in fact it is the most diverse floral system in the world, even though it’s the smallest.

In the special care of one of Kirstenbosch’s most famous guides, Andrew Jacobs, we piled into an elongated golf cart and began a comprehensive tour of one of the seven richest and most beautiful gardens in the world.

The day was gorgeous, Table Mountain loomed above us, the Cape Francolin barely moved out of our way and despite the fact this is not a heavy blooming season, we saw an amazing display of our planet’s evolutionary ingenuity.

The Cape is one of the world’s six floral kingdoms. (The other are the Northern Hemisphere, South America, Antarctica, Australia and Africa other than The Cape.)

There are about 8800 unique plant species in an area about the size of the State of Maine, and 69% of the endemic! Both facts are amazing. The density of species diversity is 3 times greater than the next highest kingdom, the Amazon portion of South America.

The reason for this remarkable and concentrated biodiversity has to do with where The Cape is: at the confluence of the world’s coldest and warmest oceans, where jetstreams and ocean currents collide ferociously.

The result is a climate that is mostly dry, but when it rain it rains hard. The result is a plant kingdom that thrives because of considerable moisture but had to learn how to conserve water over very long periods of dryness.

It is mostly a leafless kingdom, with photosynthesis occurring in the stems. What looks like leaves are stemmy reeds, waxy or hairy and almost always pointed and sticky. Butterflies are still needed for pollination, but because there are no leaves for the caterpillars to eat, these butterflies’ caterpillars are carnivorous, eating ants!

Protea and red bush tea are the two stars of the kingdom, both fynbos which is the single largest plant grouping in the kingdom.

One of the best places to see the greatest variety of this kingdom is atop Table Mountain.


After our great tour we went to nearby Groot Constantia, South Africa’s first vineyard, and tasted the Sauvignon that has been cultivated here since 1679! The restored houses and stable and excellent orientation center depict the life of Simon van der Stel, one of the first governors of the Cape and generally considered the father of the Boer culture.

It rained this morning! It’s not supposed to rain, now. (How often have you heard your tour guide say this?) But the climate is changing, and fortunately for us, the afternoon was bright and beautiful!