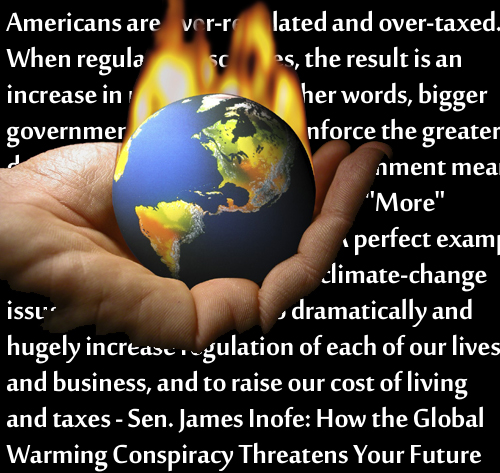 As the stubborn, not-too bright bully on the block, America has shifted to accepting global warming as human caused, but it took a few Katrinas and Sandys to tip the balance. And experts still spend inordinate amounts of time explaining the obvious to the recent convert:

“Global warming” or “climate change” or whatever you want to call it is manifest most dangerously in extremes, not just increasing temperatures. So terrible winters on top of terrible summers means we’ve screwed up nature. It’s our fault and we’ve altered nature.

Winter and summer are naturally the opponents in a ping pong game. If one hits harder, it sets up the rebound to be harder as well.

And while it’s been predicted for some time that the short-term global effects of climate change could actually benefit America, because America reigns as the world’s principal power, there’s no way we’ll avoid the much more terrible negative effects:

“The U.S…. may benefit from increased crop yields, [but] its military may be stretched dealing with global “humanitarian emergencies,” Scientific American reported five years ago.

The rest of the world has more or less recognized this for a long time, so there are plenty of studies to refer back to. As America’s conversion into reality became policy when the Obama administration came into power, America began to participate in the global studies.

Africa has the largest percentage of unstable societies in the world, and what early climate change studies show is that these misfortunes were mostly predictable, founded mostly if not exclusively on climate change.

Because Africa is the only continent to stretch so far into both hemispheres, it is unfortunately placed to feel the greatest effects of climate change.

Jihad, civil war, violence after contested elections – even the reemergence of debates about social issues like female circumcision – all seem to ebb and flow with the weather. They are all symptoms of climate change.

John Vidal writing last month in London’s Guardian cited a variety of studies showing that the Arab spring had less to do with human rights than food insecurity:

While the self immolation of the Tunisian street vendor “was in protest at heavy-handed treatment and harassment in the province where he lived… a host of new studies suggest that a major factor in the subsequent uprisings … was food insecurity.”

When the rains returned to drought-stricken Somalia, was it only coincidence that the Kenyan army occupied then pacified the country? Or more likely was the Kenyan army decision triggered by an easier time supplying its troops with food?

And now that drought has turned to floods, pacified Somalia is growing restive, again, and this instability is even spilling into neighboring Kenya.

Even in Namibia, among the least densely populated countries on earth, growing instability from climate change motivated the president to declare a state of emergency on Friday.

Record floods in 2011 have now been replaced by record droughts.

The frequency of climate disaster in Africa is increasing so fast that even statistics are lagging. PreventionWeb is a UN agency that simply documents human disasters. From 1980 – 2008, the ten greatest disasters in Africa were all due to drought.

We expect, now, that the top ten disasters when compiled for 2008-2013 will be from flooding.