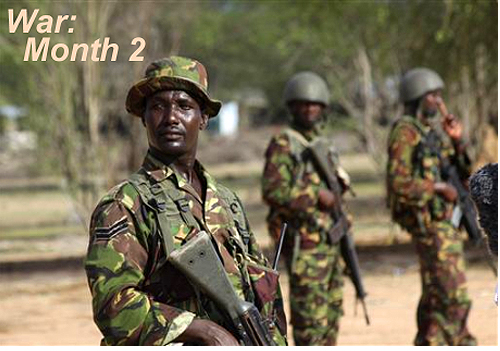 It’s clear that Kenya’s invasion of Somalia will be lengthy. The army is not moving quickly, there is hardly any action at all, and Kenya seems content to occupy the bit of land they’ve conquered while letting the initially stated objective of Kismayo disappear.

In the end the strategy could work. Al-Shabaab while ruling much of Somalia is not really a very good governing entity: they are fighters not administrators. Kenya and France seem to have laid a siege over the port of Kismayo. Starving al-Shabaab might be the prudent “way out.”

The respected African analysis, Robert Rotberg, said last week he thought the Kenyan slowdown was because of heavy rains. But the emeritus prof has got that a bit wrong; rains in eastern and southern Somalia have abated considerably in the last several weeks. The Kenyans haven’t been stopped by water.

But the rest of Rotberg’s analysis had some compelling aspects to it. “Al-Shabaab’s days as a sustainable and robust fighting force are rapidly coming to an end,” and I agree. He also posits a UN trusteeship for what will “come after” the Kenyan/Ethiopian victory, very much as Southwest Africa was established under South Africa following World War II.

Kenya roared into Somali nearly two months ago, then screeched to a dead stop when it became clear that al-Shabaab was fortifying a city northwest of Kismayo, which could conceivably clench the Kenyan military in a pincer action if they continued to the sea.

As the war begins its second month, Kenya’s 3-4,000 troops have lost 4 in action, 6 in accidents and ten more wounded. Not bad.

So… Kenya stopped, and there it’s been for some time. In place of fighting a remarkable diplomatic effort by Kenya has laid the ground for their lengthy involvement. First, they reversed the initial displeasure of the puppet government in Mogadishu. Then, they exposed Eritrea as supplying al-Shabaab’s military. And finally, they’ve kept both America with its drones and France with its naval gunships involved.

At home the terrorist threat of al-Shabaab has diminished. The first couple weeks saw grenade attacks in Kenyan churches, bombs in Nairobi bars and a restless Somali population. That’s settled. Personally, I still don’t think it wise to restart tourism in Kenya, but I’m very glad that the threats to the Kenyan population seem to have diminished.

But the war is a terrible drain on Kenyan resources. The country is preparing for its first election after the new constitution. Its shilling is in the tank with no indication it will recover. Economically this war is the last thing Kenya needs.

Kenya believes this effort will, literally, keep al-Shabaab at bay, the bay at Kismayo. And if the siege ultimately works, perhaps Kenya can walk to the seaside without firing a gun. It sounds crazy and beautiful. We’ll just have to wait it out … with the Kenyans.