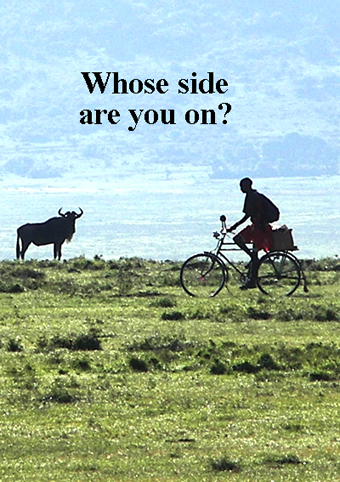 Education is fine if you’ve got something to do with it. Is there going to be war in Ngorongoro?

The great experiment known as the “NCA” in what ABC’s Good Morning America christened one of the world’s Natural Wonders is coming apart.

Most tourists know it as “The Crater.” But Ngorongoro Crater National Park is just a tiny 100 sq. mile circular caldera sunk into a much larger wilderness area twenty times as big, officially known as the NCA (Ngorongoro Conservation Area).

The crater’s unique ecology collects more water than virtually any other part of the NCA, and its deep flat sedimentary and volcanic substrata – like the Serengeti – creates areas of grassland plains perfect for Africa’s great herbivores.

So the crater itself attracts a larger concentration of animals than the surrounding NCA. But there’s plenty out there in the NCA, too, on the gorgeous highland hills that ultimately descend onto the Serengeti’s prairies. And if wildlife couldn’t flow between the sunken crater, the NCA and the Serengeti, there wouldn’t be any wildlife in the crater.

Yesterday, the Parliamentary Committee in Dar assigned to the area began moves to forcibly evict Maasai from the NCA.

Committee member Dr Raphael Chegeni claimed there were now more than 60,000 Maasai living in the NCA with “unsustainable” numbers of cattle. This is well beyond the 25,000 Maasai Parliament authorized as sustainable.

You see it was presumed that as Tanzania developed, so would Maasai, and that they would choose to abandon traditional lifestyles for modern opportunities, and so while technically their population would grow, they would leave the wilderness.

And to its credit, the Tanzanian government, Italian NGOs and even the American Peace Corps have spent years building schools and dispensaries to get Maasai healthy and educated and ready to be a bank clerk.

But graduating from primary school in Ngorongoro didn’t turn out to be the magic wand intended. There aren’t any jobs for fresh school leavers. Modern Tanzanian bank managers don’t like Maasai kids.

Tanzania is an increasingly corrupt society, its superficial democracy immune from ethnic troubles but dominated by a small cadre of rich and educated.

Maasai in the main are neither rich or educated.

Recently, actually, things looked promising. Several years ago Tanzania’s Prime Minister was Maasai, and he was a fabulous Ben Nelson! But alas, he got implicated in several huge corruption scandals and lost his job and his clout. He’s headed for jail.

Before foreign hunters or tourists there were Maasai. Maasai and wild animals have always lived together just fine. And this is the heart of Maasailand. But over the years (starting in 1921) the Maasai have been squeezed into smaller and smaller areas, reserving larger and larger areas for foreign hunters and tourists which bring in much more revenue than hut taxes.

Besides, who in their right mind would want to spend their lives in a straw hut? Chief Blackhawk was last photographed in a suit talking to President Grant!

In 1972 Maasai were bumped entirely out of what is now the Serengeti, and theoretically, out of the 100 sq. mile crater.

It was a contentious act, and the “treaty” with the Maasai allowed them to continue to live in the NCA provided they didn’t alter their lifestyles from traditional herding into, for example, planting sweet potatoes (which is exactly what many do, today). Another caveat in the treaty allowed them to bring their livestock down into the crater during times of drought.

Those concessions were clearly humane, but they have led to uninterrupted tension between the Ngorongoro Maasai and park authorities ever since 1972.

To begin with, who was going to define a drought?


I became quite good friends with a really sharp Ngorongoro Maasai in the 1980s who was the third most important son of the most important Maasai headman near Olmoti. When his two elder brothers died, he became the chief area spokesman.

There were several droughts during those years, and tension grew as the Maasai brought more cattle into the area. Rangers tried to evict them. Maasai are great spear throwers, but they turned out to be terrific rifle shooters, too.

Rangers and Maasai were killed in these gun battles. I remember camping with a group in Lemata on the crater rim when we were awakened by this gunfire in 1993.

My friend negotiated an end to the battles in the mid 1990s. Several Maasai, including him, were trained then hired as rangers. It was a brilliant move. Until he was killed in a war when he and other rangers were trying to evict Somali from the eastern Serengeti.

And since then, the area’s Maasai population has more than doubled.

Tanzania has some fabulous crusaders for human rights which have tried in the past to mediate between the government and the Maasai.

The Lawyers’ Environmental Action Team is among the best. But they tried and failed to mediate a dispute with Maasai in the northeast Serengeti last August, and they are now overwhelmed with work in the areas of Tanzania’s new gold mines and seem uninterested in the current dispute.