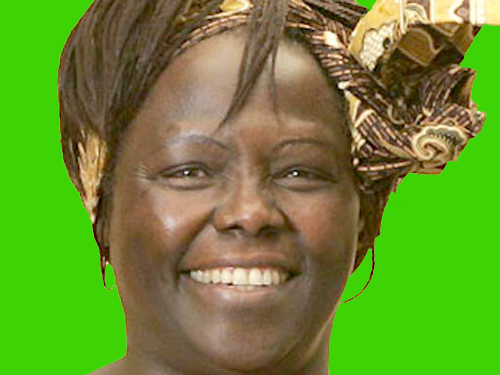 Wangari Maathai was known above all for planting trees, and last week she will be cremated since she insisted she not be buried in a wooden coffin. Few people carry such a presence in life that it continues into their death.

Many discounted Maathai’s 2004 Peace Prize as the Nobel Committee’s trend towards politicizing peace, for Maathai was an activist who often put her foot in her mouth, managed to personally offend almost all her opponents, and relentlessly represented the poor against the rich.

She framed the degradation of the global environment as a rich man’s plot against the poor man. But she never wavered in her beliefs, not when she was repeatedly beaten by police, divorced by her husband for being too “unwomanlike” or ultimately kicked out of government because she wouldn’t toe the party line.

She didn’t do well in groups. She was a lone, articulate and very powerful voice. I’ve read an astounding range of the number of trees that she’s been credited with having planted in East Africa, enough to reforest Jamaica. And clearly it was her voice, not her hands, which got each sprout into the ground.

Her foundations faltered and recovered, her short stint as a Member of Parliament caused more divisions in her own party and arguably jeopardized her own causes, and her inability to assume direction from others meant that journalists were cautious about interviewing her.

But her legacy will prove so much more powerful than her remarkably successful Nobel Price Peace life. She’s a woman in a Third World, so a soldier in the legion of radicals that in my life time has created more women in power proportionately in the Third World than in America. She was instrumental in creating the still debated section of the new Kenyan constitution that mandates a third of all elected officials be women.

She’s was scientist, a rare commodity among upcoming individuals in the Third World. She was divorced, something that condemns many Third World professional women to long if not eternal periods of ostracism. She was notably unstylish, wearing pseudo-traditional garments (mainly because they were green) that never fit well.

And most odd of all, she was green. Green is a concept in business and politics and society that is either a hedge or anathema to fast developing Third World governments that dare to cap their steam stacks or scrub their coal mines at the peril of inhibiting growth.

And that principal characteristic of Maathai places her allegiance squarely on the planet as a whole, not just Kenya. This anti-parochialism is far too lacking, today, in America and the rest of the developed world where more and more we see ourselves in smaller and smaller containers.

There’s no one in my sights who replaces Maathai. But my vision is restricted from outside her world. The final judgment of her legacy will be if others in Kenya and The Third World now assume her role. All of us worldwide should hope so.