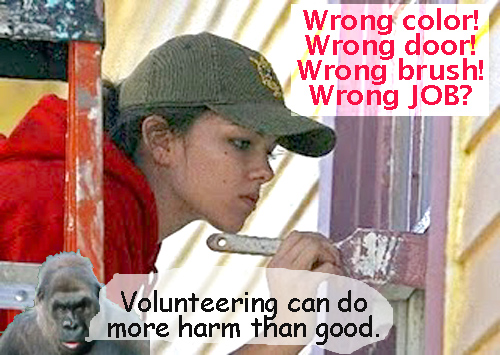 I often receive requests by sincere travelers who want to volunteer in Africa. The latest is from an enthusiastic woman who wants to help the mountain gorillas. She doesn’t want to pay “some tourist company thousands and not directly help.” Like many well meaning people, she’s got it very wrong.

Read In the Kingdom of the Gorillas by Bill Weber and Amy Vedder, the two scientists who began the mountain gorilla project in the 1970s. From that book alone (and there are many more) you’ll see that without tourists paying the huge fee to the Rwandan government just for the privilege of seeing the gorillas, plus the funds paid local transporters and hoteliers, it is likely there would be no mountain gorillas left.

The sentiment to volunteer is a hopeful one, to be sure, and shared by many enthusiastic conservationists. And it is typical of caring travelers and crosses well beyond animal conservation into all areas of volunteerism.

Volunteerism can be good, please don’t mistake me. But there are several negative sides to it which send up serious red flags to the organizations involved.

Casual volunteers usually cause more difficulties than they expect. The most important one is time. Unless you have a half year to dedicate to some project, it’s unlikely you’ll be invited to assist. This is as true for mountain gorilla research at Kinigi as it is for AIDS education in Soweto.

Someone coming for just a month, for example, causes tremendous housekeeping problems such as food and housing (which you cannot try to do yourself).

Integrating the skills of a new team member into the team is as hard for an experienced field researcher as a casual volunteer. It takes careful analysis and if done wrong can compromise the goals of the entire project.

The mountain gorilla project in particular is not your down-the-street food bank. The people who work there are highly educated, generally postdocs, in highly specific fields. Of course any organization can use someone to paint the walls, but doing that robs part of the high intentions of the project: it takes those types of jobs away from Rwandans.

Remember that a principal goal of practically any aid project, whether it be animal conservation or public health, is to ultimately turn that project over to locals. The first stage of this implementation is turning over the least skilled jobs, something that is almost always the rating of a casual volunteer.

And finally, there is a negative side that is extremely important to me personally that people must try to understand. Volunteering in any sense can coopt one’s support for the grander projects that carry real potential. Projects that are government to government, or foreign aid support of organizations like the Mountain Gorilla Project.

Our first and foremost responsibility as true conservationists and sincere volunteers is to support politics at home that will continue to fund the organizations we support. If you were able to expend energy, for example, in making sure that your political representatives supported USAid projects of the Mountain Gorilla Project, and you and others were successful, you will have achieved a much greater goal in helping the gorillas than anything you could do personally in a short time there.

I am happy and willing to link anyone with trained skills appropriate to projects in Africa with any of a number of organizations, provided you have a half year or more available. Let me know! Otherwise, recognize that it is we paean tourists who have done the greatest good for the mountain gorillas, just by going there and “paying thousands” to the local government and local businesses!