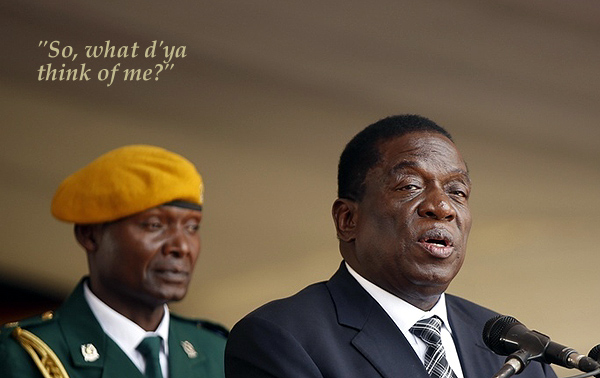 One week from today thirty years of Zimbabwe could be discarded and a new age for this beautiful, resource-rich country could begin. Or not.

A week from today is the first election in more than thirty years with a serious potential of being free and fair. Even so, the brainwashed generation-plus of Zimbabweans who have never enjoyed being free might be too scared to try it, now. And then there’s the army. Will they allow free results that diminish their power?

Zimbabwe’s rules for electing the chief executive – like most democracies – require more than 50% of the vote, so given the number of people running and parties involved, it’s quite likely they’ll be a run-off.

It’s quite likely that the current president will be in that run-off. Emmerson Mnangagwa did not rise to power through the ballot box. He checkmated the Queen and won the throne after the last dictator, ailing and demented Robert Mugabe, was toppled from power in a palace coup.

As one-time Vice President and ruthless enforcer of Mugabe’s horrid regime, Mnangagwa has all the credentials of a second Mugabe. It’s why the army let him assume power. But immediately after assuming power he put on a new face.

In his first speech to the nation after Mugabe was deposed and the wife and pretender to the throne, Grace Mugabe, had been run out of the country, Mnangagwa announced an election which to many’s surprise is now taking place almost exactly as he promised back then.

He published a real budget – something new for Zimbabweans – revealing with considerable embarrassment the waste, graft and mismanagement of the past. Excessive luxuries officials enjoyed were massively restricted.

His boldest move retrenched Mugabe’s single-most popular policy, “indigenization” – that well known confiscation of property and business from whites for redistribution to blacks. Notably he didn’t get rid of it altogether – which several of his current political opponents call for – and not enough time has passed to truly know if the new policies will work.

But in all fairness the ruthless, enforcer Vice-President, seems today reasoned and progressive.

In fact, he’s been so reasoned and progressive that public protests and other civil disobedience – which have never completely abated in this oppressed country – were allowed to flourish to such an extent that EWT among other travel companies decided “Not Yet” to return to the country as a tourist destination.

The problem as it has always been for the last two of Mugabe’s three horrible decades is the army. Mugabe built up the army to protect himself as he began restricting democracy in the late 1980s. In the end, though, the army grew more powerful than Mugabe and kept Mugabe in power as a convenient protection of itself.

Zimbabwe’s economy is a fraction of what it could be, but given its huge natural resources even the compromised economy was enough to make a lot of soldiers rich. Mugabe’s indigenization campaign was the red meat for the masses who were then subserved to any political arrangement that came with it.

In great part because the vice president, Emerson Mnangagwa, the Enforcer, was orchestrating more deceit, global criminal money laundering and outright torture than few since the Nazis. And so now he’s up in the polls to become the next democratically elected president?

We probably won’t have a definitive answer next Monday. If the election continues to be freely and fairly conducted no one will achieve 50% of the vote. There are too many candidates and parties. After all it’s the first time in the life of most Zimbabweans that they can truly express their political beliefs.

But Mnangagwa will surely be among the top two who then face a run-off.

So it will be a while before we know what’s really happening here: does Mnangagwa have power to assure a free and fair electoral process right to the end? Will the army stand aside? Will Zimbabweans who have never known violence-free elections evince their hopes or their fears?