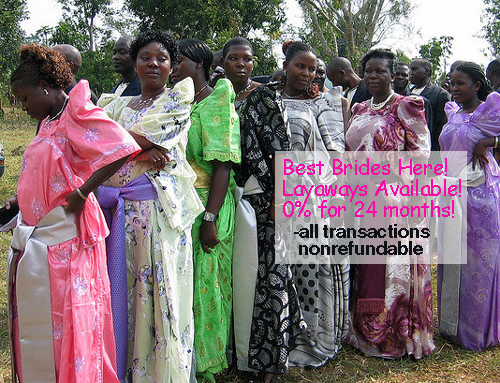 Marriage is now … ‘nonrefundable’ in Uganda. This brings a whole new perspective to trophy wives.

The irony here is that Ugandan womens’ rights groups celebrated this Ugandan Supreme Court Decision, once again proving that Uganda is a mirror universe of the modern day.

This is roughly twice the continent’s average.

The litigation Mifumi brought to the Ugandan Supreme Court was actually to make bride price illegal, essentially ending it. Instead the Supreme Court made the practice nonrefundable. In Uganda and other similar socially transitional societies, if the woman divorces her husband the bride price is refunded.

It’s hard for me to understand how Mifumi thinks this ruling is a victory, as it is anything but. It further institutionalizes a primitive custom in modern garb.

Paying the women’s parents a certain sum in order to marry their daughter is rooted in the folkways of almost all traditional peoples. But the foundation of these folkways is the institutionalized inferiority of women to men. Bride price is simply a component of this larger perception.

Now the court is telling its citizens to look twice before acting, because the act is so important it can’t be undone.

In more modern cultures like ours the man proposing, the man giving the ring, the man standing by the religious leader waiting for his bride to be presented to him … all are vestiges of these early discriminations against women, and Uganda has begun canonizing them in modern terms.

Uganda is one of the saddest stories in Africa, a once vibrant and intelligent nation that was in large part shepherded into a land of super conservatism by American republican leaders.

Click here to begin reading that lengthy story which among other bad outcomes led to the “Kill the Gay” laws that have made the country so infamous.

But like Donald Trump playing to his constituencies’ fears and immoralities, the Ugandan president has navigated his stay in power by playing to the primitive side of his countrymen.

The Ugandan Supreme Court, like all institutions in the country, is a sham controlled by the president. Its August decision on bride price reflects Museveni’s beliefs exactly.

Museveni’s victory is greater than he expected. Now even the primary womens advocacy NGO is in his camp.