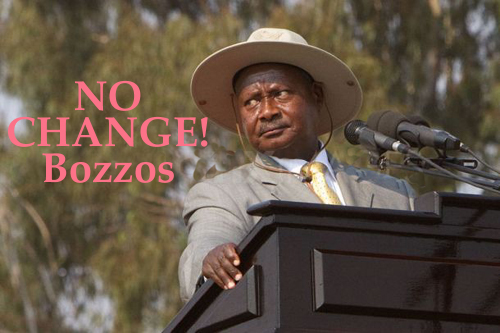 Tomorrow’s presidential election in Uganda will either be the most unread news story in Africa, or the start of Twevolution in East Africa.

The current autocrat is expected to win handily, despite election fraud, unfair international support and his highly undemocratic style of overlording that is often brutal. But if he doesn’t … win handily … CNN might have another place for Anderson Cooper to visit.

If Museveni wins he will be starting his fifth term and heading towards his 26th year of ruling Uganda. If he wins it’s in part because of long-term support of the American Right. (Get this: his campaign slogan right out of the dimwits of CStreet is, “No Change!”)

Here’s the problem. Kids don’t like grownups telling them what they can and can’t do when they reach their mid twenties.

This is essentially the reason for the Twevolution that’s sweeping the continent. African youth today are sharp, educated and infinitely more connected with the world than the old folks overlording them. That’s particularly true of Uganda.

I’m not saying that youth inherently believe in term limits, but they viscerally know how not changing political rule impedes and inhibits development.

Uganda is rapidly becoming the most backwards country in all of East Africa, when once upon a time, shortly after independence, it was the star. As if slapping this truth into its neighbor’s cheek last week, next-door Rwanda hosted an all-African conference that named Uganda the worst of the five regional East African nations in its capacity to develop.

In fact of all Africa’s 58 countries, Uganda was ranked 21st. That’s pretty awful when you consider that half of Africa’s countries are unstable or at war. (Tanzania, by the way, was 20th. Rwanda was 5th and Kenya was 4th. What was most startling of all, troubled little Burundi was ranked 13th!)

The report was chaired by one of the most respected Africans alive, Grace Machel, the widow of the former president of Mozambique.

Uganda’s youth knows this. And it seems that up to 85% of them are likely to vote tomorrow. In fact international observers on the ground expect a 75% turnout according to a leading newspaper in Uganda, although as many as 140,000 of those registered names may be dead, and 400,000 of them foreigners technically ineligible to vote.

So if the election is close … there is plenty of fodder for fire. The ironic thing is that it’s not expected to be close.

I’ve written before how Museveni is the darling of the American political right. They have been supporting his draconian efforts to do things America can’t, like ban abortions and make homosexuality a capital offense.

I haven’t been able to track it down carefully enough, so it simply remains a hunch right now that American Rightists along with their UK counterparts are stonewalling the World Bank from blocking aid funds that Museveni has been using to beef up his campaign.

The report that’s drawn my attention was published by a fiery, independent on-line publication in Uganda last month.

There’s no doubt that Museveni has used donor funds (including ours) for his campaign, which is one of the reasons he’ll probably win tomorrow. There has never been such a modern, expensive election in Africa before. And it’s been almost all one-sided: for Museveni. TV, ads, billboards, flyers, robocalls — you name it, right out of American campaigning.

It’s also been public that America and the UK are blocking efforts by NGOS like the World Bank from stopping this. The question is, who specifically in the U.S. is doing this?

Anyone out there that would like to prove me right, please go to work!

So with such huge funding support, with an economy that isn’t doing so badly, with enormous pride in the recent discoveries of oil and the relatively recent successful ending of the wars in the north, Museveni has the odds, even with a half million illegal voters.

But if his margin is less than the number of dead and foreign (half million) out of 7.5 million expected to vote, then watch out for Twevolution.