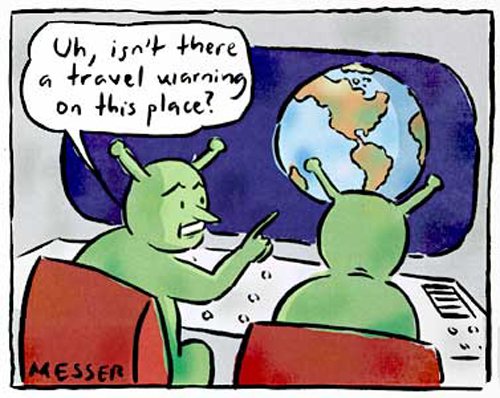 Before heading to the Caribbean for world-class big game fishing in Honduras or beautiful beaches in El Salvador, did you check the State Department Travel Warnings? You should.

Both Honduras and El Salvador are much more dangerous than, say, Mexico, according to the State Department. And at last, I agree.

Nineteen African countries are on the U.S. State Department travel warning list. That’s more than half of the 35 countries listed worldwide and a third of all the countries on the African continent. Is this fair?

Yes, it is. And it’s just as “right-on” as last week’s French government warnings to its citizens cautioning them about travel to a number of U.S. cities including Chicago, New York and Washington, D.C., and seven others. I’m not being sarcastic.

For many years I felt that government travel warnings were not fair. In fact, I felt that the warnings by countries like France and the U.S. were sometimes 180 degrees wrong: I fumed, for example, when Kenya was put on the list after a single tourist incident, but Egypt wasn’t after dozens of tourists were killed.

France warned its citizens about travel to South Africa, but said nothing about Haiti, where tourism strife was much greater.

Warnings existed from many countries on travel to Ethiopia, for example, long after conflict had ended. But few warnings were levied on Israel, where bombs were reigning weekly on border areas with Gaza.

It seemed that travel warnings were something other than nice advice for vacationers.

Until the last few years, travel advisories were often political tools used to pressure foreign countries into some policy. Or probably just as likely in the case of the U.S. in particular, the reflection of poorly trained state department officials.

But things have changed, worldwide. Most countries seem to be getting it right.

Slowly and surely under the Obama administration U.S. travel advisories have become imminently fair in my opinion. Under Hillary the professionalism of the State Department took a giant’s step forward from past years. I now regularly refer to the State Department website. We’ve become fair.

As have the French, and that’s an important thing to consider when you decide how much an advisory will effect your own travel.

So when Chicago mayor Rahm Emanuel cut his bitter retort short to the French move with the rude but oblique remark
, “Don’t get me started on the French,” he was tacitly accepted the criticism.

Kenya in particular has been lobbying recently to get the U.S. warning lifted.

That’s not going to happen. The Obama administration has put Israel on the list, as it should be. And so neither Kenya nor Israel will be removed from the list until tensions are reduced there, and from my point of view, that means until they leave the neighboring territories that they occupy.

This is not a political statement, although I realize it could be viewed as one. But Kenya continues to occupy parts of Somalia, as Israel occupies parts of Palestine. The terrorism this spawns is undeniable. Until Kenya and Israel leave the territories they occupy, real danger persists inside their own countries.

Of course there’s more to it when you begin to consider your own travel. While Israel and Kenya may be in very similar situations, Israel is much more capable of managing terrorism than Kenya. Tourists have not been recently harmed in Israel; they have in Kenya.

The French are warning their citizens of traveling to parts of ten of the U.S. major cities because of violent crime. That crime is localized, even in the big rural cities. So if you know where to go and where not to go, your vacation should be safe.

Even the most educationally structured holiday is still supposed to be rest and relaxation. With the great variety of travel options available, today, why “tempt fate?”

If the top of your wish list is to see the great migration and you can only travel during our fall, then there’s only one place you can go to achieve that goal: Kenya. With careful planning, the risks attending a Kenyan visit that are concentrated in certain places in the country and its cities, can be avoided.

Similarly, France is not telling its citizens to not travel to Chicago. It’s telling them to not travel in areas of the city that have a mind-blowing number of homicides.

As Chicago’s Sun-Time newspaper said Saturday, “The French are right.”