Sunday is the beginning of the end of one of the most monumental conflicts Africa has ever experience, and Sen. John Kerry was there this week to gently help see it through.

Sen. Kerry arrived in The Sudan on Tuesday and returned home yesterday. Today Jimmy Carter arrived with his wife to monitor the election. Amazingly, there’s very little in American news about this watershed event. There’s not even anything on John Kerry’s own website. But thank goodness he and Jimmy are there.

Kerry has been pivotal in shepherding a half century struggle in southern Sudan to some peaceful conclusion, untangling the mess the British created during the colonial period. His latest carrot to the Sudanese masters in Khartoum was a stunning one: that he could support removing the north from the “States that sponsor terrorism” list if all goes well this week in the South.

There’s no doubt about the outcome of the election which begins Sunday and goes on for a week. The outcome will officially express the will of The South to secede from The North. Everyone knows this and has known it for years. Diplomats have been in training for more than a year. Western donor nations have built the rooms that the new Parliament will use. Even the neutral U.N. has a presence of presumed Peace-Keepers along the contentious potential border with the North.

The question is what happens afterwards.

The election calls for formal succession by July. But that means between now and then a number of contentious issues must be resolved that haven’t been, yet. Such as the border line. How much of Sudan’s current $36 billion dollar debt will be assumed by The South. And probably most dangerous of all, who gets the oil.

The proposed dividing line between North and South goes right through Sudan’s most productive oil fields. The irony is that they haven’t produced very well, because for nearly 50 years there’s been shooting going on. In 1981 I was myself given an offer by a giant oil company to help ransom oil workers being held hostage in the area, who were later killed in the fighting.

But as I’ve been saying for some time, I think this is going to happen, and pretty peacefully. And there is such hope in the air at the moment, that there is a nearly giddy presumption the success of next week’s election will spill over with goodness into regions like the troubled Darfur.


Here’s an extremely simplified time line of the history of Sudan:

The British annexed The Sudan in 1899. They didn’t really want to because it was considered a desert wasteland, which it looked at the time. But The Nile runs right through the country, and Britain was in a contentious and globally sensitive battle with France over control of Egypt. So with reluctance and little real interest the outposts along the Nile raised Her Majesty’s flags.

Seventeen years later in 1916 with World War I as a backdrop the massive Sultanate of Darfur was absorbed by the British into the hodgepodge of what they called The Sudan. This was a terrible mistake which prevails until today. Darfur was a kingdom relatively progressive by the standards of those days, and distinctly non-Muslim. This defined a religious battle that until then simply hadn’t existed.

The British had almost two decades of training Sudanese in Muslim Khartoum as government officials, and as they wrongly did everywhere, they sent into foreign lands the officials they trained in the African capital city. In Kenya, they sent Kikuyu to Luo. In The Sudan, they sent fanatic Muslims into animistic regions like Darfur. That mistake is still bleeding.

The next generation was relatively peaceful. The colonizers of Africa I believe actually did their best work as “colonizers” in the period of 1920-1940. In part this was because of an enormous emphasis on education, but also in part because of the troubled world economies that resulted in a sort of benign interest in things overseas. World War II changed all that.

The end of WWII left a crippled Britain on the world stage, bankrupt and exhausted. Winston Churchill said it was time to end the colonial era. Not much had happened in the colonies over the last 20 years and there was not much hope anything could. The exit from the era of colonialism was a pragmatic, not a moral one. Independence would save money.

And this driving western motivation, saving money, is a theme that has caused so much havoc in Africa. Just collect as many jobs as you possibly can afford and give them as large a responsibility as possible. Forget the hodgepodge of eons of cultures and societies that you’re instantly integrating: just do it, be done with it, and get out.

This was otherwise known as the Juba Conference.

Britain had essentially neglected all of The Sudan for a half century. Now it was giving it eight years to reach Independence, a collection of tribes, more than 200 language groups, and viciously antagonistic religions. This wasn’t oil and water, it was refined uranium and explosions of the sun.

Independence was set for 1956. Imagine the millennia of battles between gallant horse-riding knights and primitive tribes over Sharia, Jesus Christ, palm nuts and women, between 200 groups of people who understood nothing about one another except the length of each other’s spears. They were in 8 short years to create a modern nation, with … a single leader.

The South which lies over the rich agricultural regions of Uganda was populated by non-Muslim tribes from the Lake Victoria region, the same groups of people who would form the country of Uganda in 1963. In fact, that was what they were fighting for in the beginning, to become a part of Uganda, not of The Sudan.

The Sudan was independent according to British prescription for all of two years: 1956 and 1957. The country was being torn asunder. A military coup in 1958 held it together. All vestiges of British idealism about self-government were gone.

In 1962 as Uganda was about to achieve independence, military leaders of the south declared their own country, South Sudan. The world took no notice. I can imagine JFK looking towards Cuba and finding a second to ask his ambassador to Britain how things were going in the former colonials and not listening to an answer that never came. 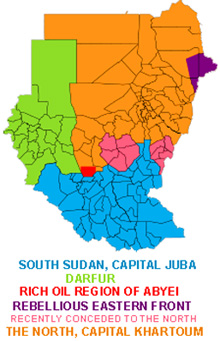 Britain didn’t like these upstarts disturbing its jet age plans for African independence. No, Britain said to The South, you can’t join Uganda.

And for that matter, Uganda wasn’t really interested, either. No one knew about the oil, yet.

In Khartoum in the North, one military coup after another essentially destroyed the place until a real strongman, Gaafar Mohamed El-Nimeiri, started a holocaust in 1969 of the most brutal and extreme ever known in this part of Africa. When the dust settled (it took two years), Nimeiri was firmly in control and terrified the world.

But he was pragmatic. He wanted to get rid of the distant war in The South, so in 1972 in Addis Ababa, he signed a Peace Agreement with southern rebels that ended the fighting for nearly a decade, giving them autonomous control of their region.

Things might have stayed that way. Except for one unexpected development.

Chevron began building rigs throughout the Sudd region that exactly today will divide the North and South. It’s a swampy, ridiculously hot, horribly unnice area for human beings. Except for a few areas where nomadic tribes did herd hoofed stock, it was a wasteland. But, of course, no more.

For five years Chevron pumped more and more oil out of the region, paying royalties usually to warlords rather than any established government officials. Niemeri watched millions of dollars creeping away.

Most of these bucks crept south, admittedly. They strengthened the “autonomous region” of the south by, well, providing guns. Oil companies have a way of doing this.

Niemeri was now a dictator growing a heart. The Cold War wasn’t over, but it was cooling. He was growing more acceptable to the West. In a move that at the time meant nothing to the west, he declared Sharia law the law of the land, and this essentially empowered him even further. In 1983 he sent troops into the Judd to secure the oil fields.

And the South prevailed. The north lost the battle. And Niemeri was deposed and killed by fellow officers in 1986. After a few insignificant military coups later, the current president, Omar al-Bashir comes to power in 1993.

The battle rages on in The South. The North grows indebted having lost its Cold War patrons. War has now been going on for nearly 50 years. In 1998 Bill Clinton sends a missile into Khartoum and blows up a factory he claimed was making terrorists’ weapons.

The North is further weakened. Lots of leaders are killed and jailed, but Bashir survives another coup and emerges as a peace-maker in 1999, pledging to end the horrible travail Sudanese in The North have experienced for generations.

In 2002 he signs a peace deal with the South. Rebels in Darfur begin fighting, emboldened by Bashir’s apparent concessions in The South. The North is further weakened as it tries desperately to manage the growing war in Darfur.

In 2005 Bashir and John Sarang of The South sign a comprehensive understanding that would lead to an election for succession the second week of January, 2011.