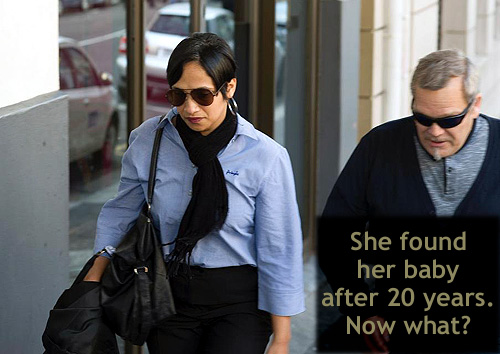 The daughter wants nothing to do with her mother. That statement has special meaning today in South Africa where 20-year old Zephany Nurse’s presumed mother began a 10-year jail sentence for having snatched Zephany from the hospital when she was 3 days old.

The now legal name given to Zephany by the convicted woman is not known and Zephany’s privacy is protected under South African law. Nevertheless, she said through her laywer, “Don’t you think for once that [her real mother] is my mother. Whether it is true or not is not for you to toy with… think what I am going through, and my father and mother.”

The university student is currently pregnant and has returned to the home of her convicted abductor to live with her presumed father.

Zephany was seemingly well raised in an upper middle-class suburb of Cape Town. I’m sure as the various gag orders of the court expire and as Zephany herself becomes more willing to discuss her situation we’ll learn much more about her upbringing.

But for the time being we can only presume by the 20-year old’s desire for privacy that she is not happy that her biological parents pressed for the prosecution of the woman who all her life she believed was her natural mother.

The court determined that she was snatched from the hospital by a woman who had suffered several traumatic miscarriages in a fit of inconsolable grief. The convicted woman, however, maintains her innocence and claims she obtained Zephany through an intermediary pretending to be an adoption agent.

The case emerged several years ago when Zephany came in contact with a woman who appeared to look like her. It was her sister who alerted her biological parents who then pressed police for a DNA investigation that led to the incontrovertible conclusion.

At that point the biological parents could have requested the prosecutor to drop the case, but instead insisted it be continued. Was that heartless?

Baby snatching is a worldwide phenomenon but not a significant one. According to CNN only 271 such cases have been reported in the U.S. since 1983.

What’s interesting is that statute of limitations and the ease of obtaining birth credentials in some states have probably contributed to virtually no prosecutions in the U.S. of illegal families after as many years as Zephany’s. It’s not clear, though, if the DNA evidence critical to the Zephany Nurse case could now be applied in U.S. law.

There seems to be an under-the-table consensus in the U.S. that after a certain long length of time the prosecution of false parents is not worth the potential trauma to the child who had no idea she was abducted.

Clearly that is not the culture of South Africa.

The biology of a mother is indisputable. Is the spirit?