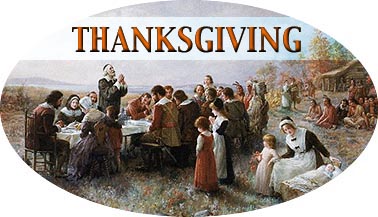 Today begins the long Thanksgiving holiday in the United States. (Canada celebrates it earlier.) Festivities continue throughout next week with many people not returning to normal work routines until a week from Monday.

For many Americans this has become a bigger holiday than Christmas and other end-of-the-year celebrations, which are considered more religious than familial.

In both Canada and the U.S. the holiday week is characterized by copious amounts of food featuring seasonal recipes and lots of sweets. The traditional meat served at the feast is turkey.

They fared poorly in the beginning until two local native Americans, both Wampanoags of the Algonkian-speaking clan, befriended the settlers. Both spoke English; one of them had traveled to England in 1605.

The “Indians” taught the pilgrims how to farm and build homesteads, and the summer planting season was so successful that the pilgrims invited the Indians to a “Thanksgiving” harvest dinner in November, 1621.

Click here for a fascinating account of the first Thanksgiving, what led up to it, and what came afterwards.

The report was first published for the Tacoma School District by a panel of scholars from the northwest. Among the things that stuck out to me was that the first Thanksgiving was an extremely friendly affair that lasted three days between Miles Standish’s pilgrims and the local Alonguin Indians.

Both women and men Indians sat at the Thanksgiving tables, but only Pilgrim men were allowed to sit at the tables since the women were expected to stand behind their men to serve them as needed.

Capt. Standish did, indeed, issue the invitation to the local Indians for the first harvest thanks, acknowledging that his small settler group would not have survived without the Indians’ constant consul and encouragement.

If ever there were illegal immigrants, it was Miles Standish and his band of exiles. But Clan Chief Massasoit threatened no barrier. In fact, the chief gave the Standish clan choice pieces of his own land.

The friendship between the citizens and exiles was so profound that 150 years later Benjanmin Franklin realized that because of the equality that women were given among the native Americans that they should be given an important seat at the table creating a new America.

According to the Tacoma document Franklin invited the principle Indians of the time, the Iroquois, “to Albany, New York, to explain their system to a delegation who then developed the ‘Albany Plan of Union.’ This document later served as a model for the Articles of Confederation and the Constitution of the United States.”

There are never things lacking for being grateful for. This Thanksgiving remember all those who built our pasts with open hearts and the courage to confront new times and new places embracing, not fearing those unlike us.