Skip to content
It’s high school graduation time! A time for celebration, parties and boasting! Here’s a selection of graduates from Tanzania. I’d like to know which you’d like to meet.

These four kids have been born and raised in northern Tanzania, but their stories are replicated continent-wide.

Headed to the University of Cape Town’s engineering school is Jimmy Masaua. He won the top Cambridge exam award in geography. (The Cambridge exams are used more in Africa than SATs for college-bound students.)

Jimmy is destined for a busy career. Tanzania’s infrastructure is set for an enormously rapid development with the new discoveries of oil, gas and gold.

And Zita Kamwendo won the top Cambridge exam award in business studies. She’s headed to either Rhodes or Wits universities in South Africa and wants to become a lawyer. Zita is currently working at a hotel in Arusha, a city which has been growing rapidly and unlike so many cities, in a beautiful way.

Ranaf Makhani, in his own words, wants to be “The savior of Tanzania’s economy (possibly).” He was the top performer in the Cambridge exam’s economics division. He’s headed to the London School of Economics. Ranaf’s humor of “possibly” saving Tanzania’s economy is filled with truth. Many people believe Third World needs an economic revolution to stabilize.

And then, there’s the unnamed herdsboy.

There are probably ten unnamed herdsboy for every Jimmy, Zita or Ranaf. He’s nondescript. His name changes with his dreams. He doesn’t want to be an unnamed herdsboy, but he’s poor. He went to school for as long as his family could support him doing so, which wasn’t for long. There’s nothing glamorous about his life. He’s often sick and usually hungry.

Africa’s young and well educated kids tower above their western world counterparts. No matter how privileged they may have been, how lucky to have been born into a family with some modicum of wealth, the efforts they put into their studies and upbringing are goliath compared to a typical American kid.

But who cares? Not American tourists. American tourists prefer to meet the unnamed herdsboy. They especially want to see him in his filthy village. After all if you can afford a safari, you probably have your own Jimmy, Zita or Ranaf.

The herdsboy agrees to meet tourists, because they sometimes give him food. Otherwise, he mostly covets their wealth, and then despises himself for doing so, and then becomes very angry.

Jimmy, Zita and Ranaf are destined for glorious futures well deserved and earned with an obsession that a typical American youngster might bring to PlayStation3.

Unlike Jimmy, Zita or Ranaf, the unnamed herdsboy is destined for a miserable, short life. Except for one possible career usually open to him. As a tourist, you wouldn’t want to meet him once he embarks on his job, so make sure you visit his village early. 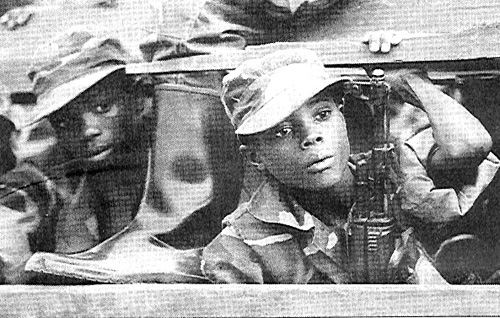