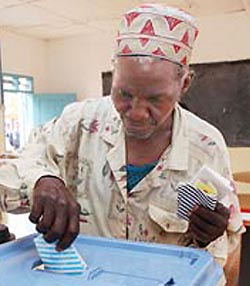 Despite the rapid development in places like Tanzania, there are still many very remote polling stations, and uniformity in how returns are reported publicly rules Tanzanian law. So of course they know right now who won in the urban areas like Dar, but it won’t be reported until little remote villages like Endulen report in as well.

The expected results are much more expected in Tanzania than here at home.

Jakaya Kikwete, the current president, will likely be reelected for his second and final term, although by a much narrower margin than the 80% of his first election.

Kikwete has lost some of his pizzaz. A few weeks after his first election, he dressed up like a commoner and walked into various government agencies, like social security, and experienced the distress of trying to get something done.

He’d walk out and the next day fire most of the staff.

He was hailed for such bravado. But those days are far gone. His main rival, Willibrod Slaa, is riding a wave of anti-corruption sentiment. Foreign donors have halved their donations since Kikwete’s first election, ostensibly because of growing corruption.

This half billion dollars lost annually, in a national budget which is only just over $6 billion, is a sizeable hit. Kikwete has tried some fancy footwork to close the gaps, including increasing the tax on foreign mining companies and issuing bonds, but it still falls massively short.

So the country has moved into deficit spending big time, even while the economy is doing nicely and would not normally mandate such red ink if the donors were being normally kind.

Like here at home, it’s the economy stupid, and in a developing country even when the economy is doing pretty well, for many it seems exactly otherwise. It will be a generation before the developing world can provide to the extent the developed world now does.

And as communication increases and democracy spreads, discontent rules.

Change, whether you can believe in it or not, motivates everyone’s vote.