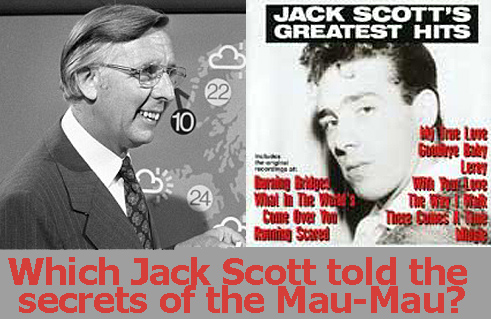 Not sure if it was the British or Kenyan rebels who were listening to rock ‘n roll or whether a Royal Air Force officer later to become the UK’s most famous weatherman was the scribe, but a near half-century old document just discovered sheds fascinating new light on Kenya’s independence struggle.

The “Jack Scott List” was just discovered in a musty old cabinet in Kenya’s National Museum. The secret List revealed the names of Kenya’s rebel leaders plus a lot more.

Coming from the 1950s that can mean only one of two things: it derogatorily linked Kenyan rebels to what proper British most despised: Rock ‘n Roll. Or it was compiled by a Royal Air Force pilot who found himself briefly in Kenya who later became Britain’s most famous weatherman.

Since predicting weather remains as exciting as hibernating wood chucks, I will make the unilateral determination that Jomo Kenyatta and Pio Pinto were swingers!

The list was in an old cabinet transported from Lamu in 1981 but never opened until last month. The drawers housed the confidential files of the curator of a Lamu prison where freedom fighters were incarcerated in the 1950s.

No xerox machines in those days in Kenya. These are originals.

Crisp, some moldy, ready to disintegrate into dust, they tell fabulous stories. And the question immediately comes to the fore: why from here? Lamu is an ocean island near the border of Kenya and Somalia. It was far from the bit of fighting that was occurring in central Kenya.

Careful investigation of the documents has only just begun, but we can surmise that Lamu would make the perfect place not only to house secret war documents, but as already known, some of Kenya’s most prominent rebel leaders.

The Brits correctly understood in those days of poor communication that removing the leaders as far away from the action was the most effective imprisonment. Jomo Kenyatta, later to become Kenya’s first president, for example was held for a long time in a prison in Kenya’s far northern deserts.

Kenya is waiting on pins and needles to see what the documents reveal about the British that isn’t already known.

Recent pride in the economy and new constitution has provoked in my opinion a new nationalism. For example, a coalition of local leaders in southern Kenya has just announced plans to sue the British
for forced relocation of their relatives and confiscation of their land in the 1950s to form Tsavo National Park.

“The [Jack Scott] files are a real treasure as they explain in detail how the detainees were treated,” says Athman Hussein of the National Museums of Kenya without yet revealing the details.

Museum officials have, however, revealed the story of Pio Gama Pinto, an Indian who later became an important political advisor to Oginga Odinga, Kenya’s first vice-president and father of the current prime minister.

Pinto was one of a number of Asians deeply involved in the independence struggle, something many Kenyans still refuse to concede. The Jack Scott List papers describe how Pinto refused Brit “efforts to turn him over” to their cause as a spy.

But museum officials have not yet explained exactly what these efforts were: i.e., was Pinto tortured or just bribed?

The List papers reveal that the Brits were concerned about local Kenyan women, many of them also Asian from the coast. It describes in detail how a rebel, Said Mgunga, was organizing women and women’s demonstrations in the coast that were attracting British scorn.

Another woman rebel, Sarah Sarai, drew extraordinary infective from the Brit author of the List. She was described as “a close associate of the worst criminal elements on record…She is, fanatically anti-European and anti-government and an extremely dangerous character. A powerful dictator … Seeks to use Kikuyu women as a buffer between Kikuyu violence and police authorities.”

Sarah Salai Thara Njomo, born in 1913, has long been a champion of Kenyan women but has never achieved the status that the List papers might now finally raise her to. She died in July, 2003, after a long career of activism that the British found despicable as much for its success as its gender.

“Even under torture, she refused to buy her freedom…and she almost died from the effects of torture and food poisoning at Kamiti [prison]” her 2003 eulogy explains.

It will take a long time to parse the poor handwriting and faded type of these old documents, and while many Kenyans today are criticizing their officials for having displayed “a lack of curiosity” in not having opened the cabinet before now, I say who cares?