Is West Africa finally on the tourism radar?

Inside an artisan cooperative frequented by foreign NGO workers in Conakry, Guinea, I once saw postcards for sale with Massai Morani on the front.

Stamps sold nearby featured elephants with Kilimanjaro in the background.

Don’t second guess yourself—Kilimanjaro is indeed further from the store in question than New York is from London.

I suppose “les blancs” (mostly white NGO employees) swinging through Conakry looking for “African” souvenirs bought out this bewildered woman’s supply of savannah and elephant paraphernalia so consistently that she was forced to ignore geographic realities and restock.

Why has East Africa monopolized the Western vision of the most biologically and culturally diverse continent on Earth?

Please do not misunderstand me.

The cradle of mankind in East Africa will nourish your soul and should certainly make your short list. That being said—so will West Africa.

Even in-transit, you will encounter West Africa’s fascinating search for its soul.

A rich and varied past informs a present riddled with uncertainty, and more importantly, with possibility.

Unlike coastal China, or in major cities in East Africa, the forces of modernity have not succeeded in casting traditional peoples and beliefs as anachronistic and backward.

You do not need to travel to mock villages or tourist markets where people in imitation traditional dress sell you tourist curios that would never grace the inside of their own homes.

Markets and village communities are vibrant and functional, and outside large cities, foreigners remain a curiosity as opposed to walking dollar signs.

Lets assume you believe West Africa is an interesting place; what would you do when you got there?

Fly into Bamako, Mali and spend a few days hearing the best of the best play the Balafon and Kora in dives around the city.

By day check out the gigantic Bamako market famous for its Bogolan (Mud Cloth).

Take a three day cruise up the Niger river where you can sleep on the deck at night (or in a cabin if you prefer) and stare at a star-filled sky undimmed by ubiquitous electricity.

Step off the boat near Timbuktu where you can hire Tuareg guides to take you into the dessert and spend the night on the dunes.

Fly into Burkina Faso for the bi-annual African Film Festival and hob-knob with the African intellectual elite.

Hire a boat to maroon you on the wild and beautiful Bijagos Islands off the coast. 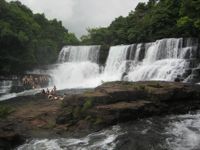 Go to Guinea in June or early July when the so-called “Water Tower” of West Africa will provide endless opportunities to explore deserted waterfalls and some of the best hiking anywhere.

Spend a weekend in Sierra Leone at River Number 2.

These ideas and the hundreds of others I will resist listing are a mere sideshow to West Africans themselves.

All cultures claim to be hospitable, but other parts of the world are competing for second place.

West African hospitality will exhaust you.

Anytime you pass by strangers eating they will yell out “invitation!” and be unsurprised if you sit down to join them.

Many travelers trek through West Africa without ever knowing where they will stay. Introducing yourself to village authorities will almost always lead to more food than you can possible put in your stomach, a place to stay, and an army of children to do your bidding.

I have deliberately left out the awful transportation infrastructure, heat, and dirty urban spaces.

So I suppose West Africa is not for the infirm or those prone to carsickness, but the adventurous traveler will not be disappointed.