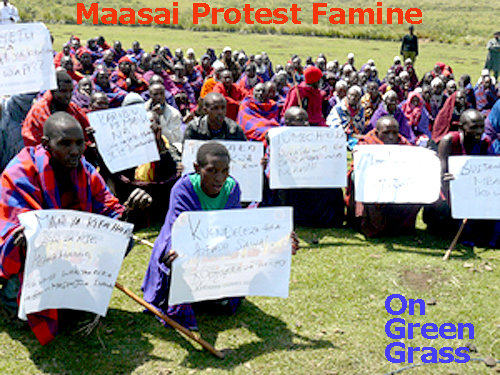 Northern Tanzania seems the epitome of everything that’s wrong with East Africa right now: economic recession, bad weather, a disgruntled population, and all in the context of a government that refuses to reform itself. Ho-hum.

There really is good news in East Africa, now, but at a little distance it just seems like silver linings rather than good news: to wit, the canceling of the Serengeti highway, and last week’s announcement that no new lodges will be built on the rim of Ngorongoro Crater.

Last month the Tanzanian government accepted international demands (especially from UNESCO) that the Serengeti highway not be built, while at the same time assuring Maasai just outside the park that they would get a new road at least up to the park boundary.

Brilliant move. We were ecstatic. Although I had expected by now that the donor funds to build this road and an alternative southern route would have been announced, I still think that’s what will happen.

And last week, after many more years of wrangling than the Serengeti highway issue, the government officially nixed plans by at least three companies for new lodges at Ngorongoro.

Again, brilliant move by a weak government drowning in the blahs. The point is that tourism is down, perhaps way down. Existing lodges are functioning at dangerously low capacities. It would be foolhardy to add any supply, now.

But of course the tourism minister, Ezekiel Maige, said “the area needed to remain natural and free from human pressures.” Right. And good of course, but that’s a sarcastic “right” coming from a government with little real interest in anything but oil rigs and mine shafts.

The lodge controversy at Ngorongoro began in 2005 and 2006, the hay days of safari travel. That’s when the super luxurious and ultra modern Kempinski Bilila Lodge attracted a principal investor named Jakaya Kikwete, Tanzania’s president. Reports indicate that the lodge is now putsing along at a less than 20% capacity.

When things are a bit bad, but not at crisis or catastrophic levels, news tries to push them through that threshhold to a point of gathering wider interest. What a wrong approach! We don’t want to get that point!

Unlike Kenya, Tanzania’s efforts at government reform have stalled. (btw Uganda’s are all but dead to the world.) A newly elected legislature last November, infused with new young blood and maverick politicians, was the greatest hope. They started the gears rolling for a new constitution, a necessary step.

But that’s over. Obese blahs cover the land, and nowhere within Tanzania more so than its important touristic north. It’s a do-nothing time.

The weather is bad but not terrible (March-May rains were well below normal, but rains for the year look OK). Scandals persist as always, with the token official here and there scheduled to be sacked. Climate change gets worse and worse and Ngorongoro Maasai are demonstrating that famine and drought is destroying their lives (while sitting on freshly grown green grass).

What does this mean?

Nothing. That’s the point. We ought not presume that reforms will not take off when things improve, nor be less vigilant that a sneaky government won’t reallocate rim land to developers. Keep your eye on the weather; if it persists through another poor rainy season, then it’s time to worry for sure.

At home, we call these the Dog Days of summer, when it’s just too hot to do anything. In Northern Tanzania I call it the Blah Days, not too hot, not too cold, just not too anything.