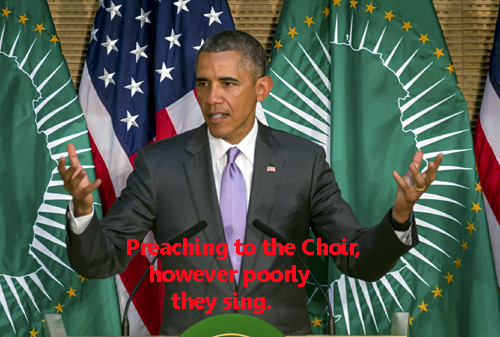 Obama’s speech to African Heads of State in Addis Ababa several weeks ago was both naive and inspiring and made me realize how weak a President but how strong a role model he is.

Obama minced no words when calling out African leaders for corruption, misuse of power and insensitivity to human rights. It was no diplomat speaking when he repeated his oft-stated opprobrium about the continent:

What was singularly remarkable was that this line was followed by wild applause, clapping from the strongmen.

It was the case throughout this most remarkable address. Many lines in Obama’s speech were more than sufficient to jail him in many of the countries whose Heads of State wildly cheered those remarks.

“In many places across Africa, it’s still too hard to start a venture,” he said, alluding to powerful nepotism and biased regulations that favor the wealthy classes. “Here in Africa corruption drains billions of dollars from economies that can’t afford to lose billions of dollars.”

He boldly claimed that many basic human and democratic rights “are denied… many Africans. When journalists are put behind bars for doing their jobs, or activists are threatened as governments crack down on civil society — (applause) — then you may have democracy in name, but not in substance. (Loud applause.)”

He nuked all diplomatic etiquette when charging three sitting African leaders with crimes against humanity: in the South Sudan, Burundi and Central African Republic. Strong supporters of these regimes … clapped.

“I have to also say that Africa’s democratic progress is also at risk when leaders refuse to step aside when their terms end. (Applause.) Now, let me be honest with you — I do not understand this. (Laughter.)”

The chairman of the AU, the forum at which he was speaking, is Robert Mugabe of Zimbabwe, a “president-for-life” who is as ruthless as they come. He did not clap. But the representatives from South Africa at his side, who have diligently supported him year after year, did clap.

“The bottom line is that when citizens cannot exercise their rights, the world has a responsibility to speak out. And America will, even if it’s sometimes uncomfortable — (applause)”

At this point many commentators in Africa began to wonder if African leaders understood English well enough to know what they were applauding. That, they do.

“In Africa this was a revolutionary speech,” wrote Richard Dowden of the Royal African Society.

Let me tell why this shouldn’t baffle you, but indeed makes sense.

Africa’s leaders fall into two categories: good guys who can’t get much done, and bad guys who spend their public lives denying their own prevarications.

Right now almost all of the 54 African presidents fit into one or the other of those two categories.

Category One Guys applauded enthusiastically, hoping beyond hope that Obama’s force will infiltrate the networks and institutions that constantly obstruct them.

Category Two Guys applauded because they’re in denial … at least public if not personal denial. (It takes a Freud or Landers to determine which.)

So I’m not baffled, and I don’t think this speech is revolutionary. Obama was giving all of them just what they wanted.

For me the speech focused my growing understanding of exactly who Obama is.

I see Obama as a weak leader. He’s a professor, a role model, a stellar person. He believes like all good wise mentors that the spoken word can be as powerful as the clever act.

In that, especially in Africa, he is oh so wrong.