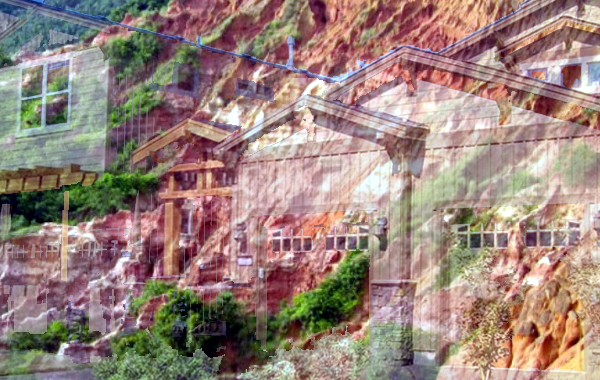 When the cat’s away, the mice will play… If you’ve used the popular Breckenridge siding for your house or renovation, you’re a part of a horribly malicious global scheme run by the Chinese, facilitated by the American wood companies Roseburg, Evergreen and Cornerstone, and given a wink and a nod by the Trump administration.

As a result Gabon has lost much of its precious rainforest, the very rare okoumé (Aucoumea klaineana) timber in particular.

For years – well before the Trump administration – environmental groups have been ringing the alarms regarding the harvesting of okoumé wood. You see, it’s illegal to do so.

The wood is very rare, listed as “vulnerable” by the IUCN, found only in Gabon with possible slight patches in neighboring Congo and Equatorial Guinea.

The U.S. hasn’t enforced its regulations against the use of okoumé for several years. In fact it looks like it will take a newly reopened justice investigation to force regulators in the Environmental Protection Agency to enforce their own regulations.

There are plenty of more environmentally sustainable and easily obtained hardwoods than okoumé to produce excellent siding for houses. Why this particularly rare hardwood was used by Roseberg, supplied by Evergreen and Cornerstone, was never clear until a few months ago when the Washington-based Environmental Investigative Agency (EIA) published its report:

“Bribery, overharvesting and tax evasion,” is how the report’s media summary begins.

Inside the report is evidence of crass bribery in multiple directions: Briefcases filled with $172,000 (odd number) handed to Gabon’s environmental minister several times by bagmen for Evergreen and Cornerstone’s international supplier.

“In the US, the complicity of the main importer [Evergreen] and the deliberate negligence of a prominent manufacturer [Roseberg], both of whom EIA investigators met undercover, are critical elements of the toxic supply chain,” the report’s executive summary charges.

Winks and nods from U.S. regulators combined with discounts not contracted, perks like overseas vacations and grand gifts, all subverted these American companies to buy something cheap but useful that was widely known as illegal: the mice that played when the cat’s away.

Although a few weeks ago Roseburg officially suspended selling the siding, Home Depot still retails remaining stocks of Breckenridge calling it “America’s Most Trusted Home Siding” and classifying it as “environmentally safe.” Menard’s also carries the product, but it’s unclear they continue to sell it.

Roseburg suspended the sale when the global outcry became too loud to ignore. Video of the undercover meetings with Roseburg officials will air soon on EIA’s website.

Pulling Paragraph-Explaining-Trumpland #4 off my shelf of repeated explanations, I don’t think Trump or even major Trump officials knew what the hell they weren’t doing. Indeed, Breckenridge siding might figure prominently in Trump construction because it was considered the premiere veneer siding on the market.

Even so I doubt there is any established or shady policy involved in this. In fact there are probably hundreds if not thousands of similar incidents of regulatory malfeasance under the current administration simply through neglect and disinterest.

There are fewer regulators of everything. There is less money, even for the IRS, to do its jobs. We have no government. We have a collection of rich people trying to keep their country club afloat. Either they are intentionally subverting the government for really evil ends, or they simply have no clue what governance takes.

When one of these myriad of issues pops into the wider social conscience, then fortunately as with this and thanks to EIA, investigations are forced (both here and in Gabon), American companies scramble to make good and at least for the moment, okoumé harvesting slows down.

But it’s too late. Gabon is raped, making its future unsustainable even if climate change and predatory capitalism weren’t also eating it away.

And the hundreds if thousands of other similar situations trek on, chaos bloats, governance disappears.