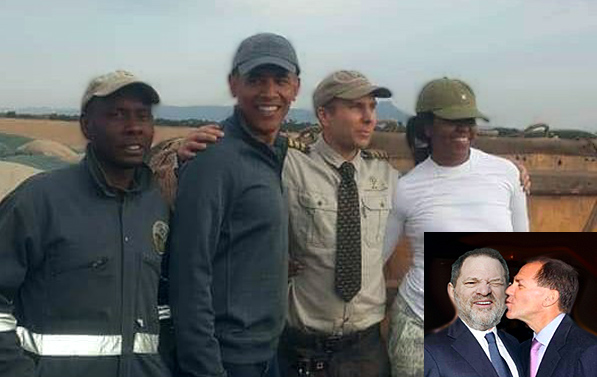 The Obama family just took a “secret safari” in Tanzania in a private reserve owned by an anti-conservationist American billionaire who was fined $2 million by Fish & Wildlife for changing the tidewaters of Chesapeake Bay, who has been charged by Tanzanian groups for illegal draining of the Grumeti River and for supporting the Road-Through-The-Serengeti, and who currently is knee-deep in a controversy regarding Harvey Weinstein.

See a lot of lions on your safari, Barak? #MeToo on my last safari.

The family – like other naive elite American families – stayed in a private reserve just north of the Serengeti rife with controversy — locally and globally — which is owned by an American hedge fund trader, Paul Tudor Jones. His list of anti-conservation acts was so great by the late 1990s that he laid a whole bunch of cash on the African Wildlife Foundation and became a director as cover for his inner self.

It only takes a third grader with Google skills to shovel out the dirt on Jones, and that really isn’t my intention now. I’ve done that plenty of times before.

Basically what Grumeti represents – so long as Tudor owns it and acts as he’s been doing – is cover for anti-conservation greed by hosting the good, elite folks of the world. Bill Gates seems to love the place.

And it means that good, elite folks of the world are easily duped, because I refuse to give up the hope that people like Barak Obama are those who can clean-up the messes of our current world. They just obviously can’t help us end them.

Obama’s refusal to boldly deal with the problems of today in his recently delivered speech in South Africa could generously be construed as benign neglect if you accept he was simply being reverential to Mandela’s legacy that patient morality leads to a good ending. Nevertheless, that was hard to swallow given the state the world’s in right now.

But Obama’s visit to the Grumeti Reserve is tacit complicity with anti-conservationists and has no justifications.

Tanzanians, of course, were flattered beyond imagination with the visit, particularly since Obama and former President George Bush were both in Dar-es-Salaam at the same time. Together they laid a wreath on the memorial for those hurt in the 1998 embassy bombing there.

All well and good. Swahili media covered the event rather extensively, but English media was very suppressed. The Tanzanian Tourist Board director admitted yesterday that the government wanted to keep the safari secret because “that’s what prominent families want.”

The Swahili media focused on the Grumeti controversy, and the fact that the private villa Obama used in the private Grumeti Reserve is probably the most exclusive haunt in the woods in Africa.

Grumeti is a good choice for game viewing at this time. At least his safari consultants got that one right. Most of the year the reserve provides only mediocre gameviewing but in June and sometimes July the great wildebeest migration tears through.

I was unable to get any information as to whether the Obama’s actually saw the great migration, although they were on the late side. But for a good month after the migration passes through there’s a lot of residual game viewing that slowly then peters out usually by August.

For the rest of the year the reserve is used mostly by rich persons who go there to hunt, as Tudor Jones himself does.

Obama captured our hopes and dreams. We were all so lifted by his rise to power, but he seems to have kept soaring into that rarefied atmosphere of the elite where he is now just too high up to notice us, anymore.