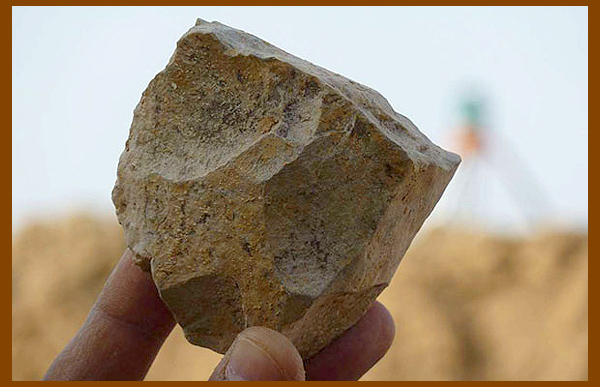 A team of French and north African scientists make a plausible claim that East Africa may not, in fact, be the Cradle of Humankind.

Stone tools dating to 2.4 million years ago were discovered in a remote part of Algeria near the Sahara. Stone tools, not fossil bones, are the current basis for postulating where the “first man” arose.

“Fossil bones,” of course, are not bones. They’re stone, mineralized casts of early bones. No early man fossils earlier than several hundred thousand years old have ever been discovered with some of their original organic material, like DNA.

For every early man fossil found, there have probably been a thousand or more of the tools they made and used found near them. This is because the tools were stone from the beginning. They didn’t need all the special circumstances that a bone needed to become a stone.

So it’s really from the large collections of early man’s stone tools that we’ve generated such wonderful theses about early man.

Tools were found long before any early man fossils were found. The reason Lewis and Mary Leakey spent a quarter century at Olduvai Gorge searching for a hominin fossil was because they continually found so many tools.

Those tools became known as Olduwan. They portray a certain complexity associated with the early man fossils that the Leakeys subsequently found at Olduvai, dating to as early as 2½ million years ago.

That same level of complexity exists in the tools recently found by the archaeologists in Algeria. It’s now only a matter of time before a hominin fossil is found there, too.

Previously it was thought the reason we first arose in East, rather than northern, western or southern Africa, was because of the climate at the time.

Africa was drying out rapidly. The Sahara was stretching across most of West Africa. The barrier between habitable savanah and desert was presumed just outside Ethiopia, just beyond its ring of mountains. The great southern deserts of the Kalahari and Namib precluded a wide range of habitable savanah in the south.

The equatorial regions, presumably, retained the last fecund habitat. The stress of the changing environment was the obverse catalyst for the evolution of a hominin, as the jungles died out and bipedalism became necessary for traveling between the fewer remaining forests.

At least this has been the presumption for many, many years. Now, it has to change.

Either the geologists deductions about early climate are wrong, or there is something wrong with our model that early man could not prosper in a desert.

There are other gnawing questions, now, too. Did early hominins evolve separate species all over Africa all about the same time? Or were the yet-to-be-discovered Algerians simply migrants from East Africa?

For this critical period in human evolution, 2½ million years ago, there are many dozens of finds of early hominins in East Africa. There are a couple in southern Africa, but until now, none in northern Africa.

Is this simply the case because of where scientists found it convenient to work over the last half century? In other words, had the Leakeys been in Algeria rather than Tanzania, would northern Africa now be the presumed “cradle of humankind”?

My own view has been consistent for many years, and as a result I’m not surprised by the Algerian finds.

Even scientists race to conclusions. In fact it’s something their training demands. They’re more circumspect about it than I am in so characterizing them, as they diligently try to remind us that it is a “hypothesis” rather than a “conclusion.” But once on Opra, the distinction wanes.

The body of knowledge that we have about early man is impressive as I review its progress over my life time. But it’s yet an infinitesimal representation of those long-ago times. Charting early man is like deducing the geology of planets around Sirus: so fractional as to be mostly meaningless.

When Leakey first found Zinj in 1959, the first publicly announced definitive early man fossil, it was exciting to wonder if Olduvai in East Africa was where man was born. More than a half century later we have hundreds of old man skull bones, and the evidence continues to suggest the reasonable hypothesis that the cradle of humankind is East Africa.

But we haven’t yet reduced even by one the number of zeros after the decimal point’s fraction of what must be out there in Africa’s dirt. And the Algerian find is absolutely an OMG archaeological moment.

My view has always been that the biological understanding of early man’s evolution is so much more important than where it occurred, something I can’t imagine we will ever know well.