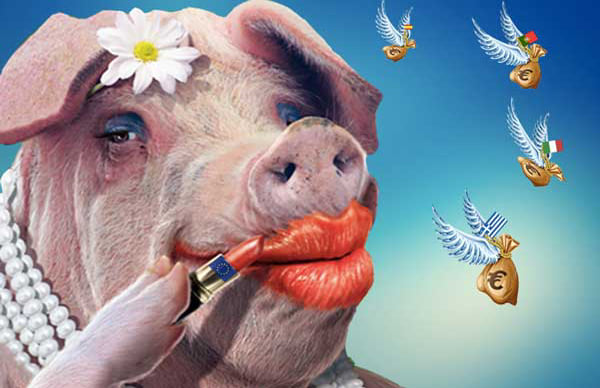 Britain banned slaving by sea in 1807, only a half century after the slave trade really got into gear. So when the slaving vessels financed by British entrepreneurs were suddenly threatened something else had to be found to offset the capitalization.

The early explorer, Richard Lande, wrote that while all the commercial ships he encountered at the exit of The Niger in the early 1800s were still packed with slaves, they were also packed with palm oil.

Ship captains discovered to their delight that a diet of cheap palm oil kept a lot of their cargo alive, and that when the slaves were finally dumped in the American and Caribbean ports, a sheen of palm oil made the product look even more appealing!

More to the point, if a British naval vessel relieved them of their precious cargo, the next best thing would be left in the hold: palm oil.

As Britain’s naval net tightened and its laws by 1834 became even more stringent against slavery the human traffickers who financed the slaving ships switched to marketing palm oil. It was a good move: Cheap, it easily replaced whale oil for candles and soap.

And as entrepreneurs are wont to do, some fantastic claims started to circulate about this miracle product:

“The thing they call Negre-oil, and ’tis made in Barbary, yellow it is as Bees wax, but soft as butter. When they feel themselves ill, they call for some of that, and annoit their bodies, as their breasts, bellies, and sides, and in two daies they are perfectly well. But this does the greatest cures upon such, as have bruises or strains in their bodies.”

Negro-oil as a product name didn’t fly too well, so “palm oil” became the lasting name. But it was amazing how quickly British manufacturers began to use it, and not but a few of the more famous British ointments of today were born with the newly available supplies of palm oil in the mid 1800s.

But Africa was a hard nut to crack. Whether it was the Lande brothers discovering the cannibals of the Niger or Burton hung up in the rapids and swamps of the Nile or du Challieu discovering the deathly obstacles of the jungle, a regular supply from Africa seemed impossible.

So many of the palm tree saplings in Britain’s African colonies were moved to its more developed colonies in southeast Asia.

Today it is virtually impossible for a modern society’s status quo to hold without palm oil from Asia. It is in motor oils and other lubricants for manufacturing and consumer convenience, in more and more foods particularly in Asia and southeast Asia, in road surfaces and window treatments.

The demand for palm oil is greater than its supply, and the price is increasing. So a number of East Asian countries like Malaysia rapidly developed what they felt were environmental protections to save an industry that now has more than 650,000 employees.

Sorry, said the EU. The EU is going to ban palm oil imports from anywhere.

So where are you going to go for your lipstick?

How about Rwanda or Uganda or Senegal?

African entrepreneurs are starting to clear-cut at alarming rates to make up for the markets not controlled by the EU. The biggest one? The United States.

In steps the wisest of the Europeans, Norway. In an extraordinary move that threatens the sanctity of American beauty stars, Norway is paying African countries not to clear-cut for palm oil despite the American demand. The first deal was with Gabon, a relatively developed and very perfect environment for harvesting palm oil. Norway is giving Gabon $170 million not to support American beauty pageants… well, among other objectives.

There are replacements for red lipstick’s excessive use of palm oil, and they are expensive, and so red lips grow dear. But what’s new? We’re finally coming round to realizing if we want a home to live in we can’t start fires around it, and that, too, is expensive.

America is being horribly reticent in joining the rest of the western world banning palm oil. It’s shameful how organizations like the World Wildlife Fund promote nonsensical policies for a sustainable palm oil industry.

And as the Norwegian study proves, clear-cutting now for palm oil in Africa would devastate its critical other sustainable agricultural needs.

What’s that expression about a pig and lipstick?