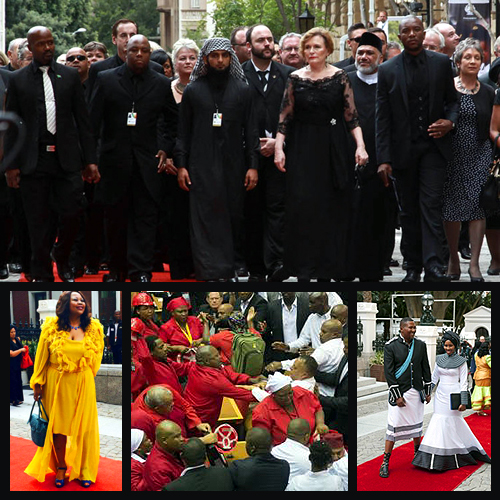 South Africa’s State of the Union last night was not “unprecedented chaos,” just theater at its best. Isn’t that what government is all about?

One longs for days past when information didn’t fire so quickly all over the place, when natural barriers – like time and party lines – filtered the nonsensical from what was important.

We all want thrills. There’s no thrill in a chief executive reciting all his accomplishments. Rather, we want to see a Congressman shouting at the President, or a void left by a Supreme Court Judge.

Last night in South Africa their State of the Union erupted into ultimate theater.

It was abjectly comical.

The main drama was when members of the country’s most revolutionary party, the Economic Freedom Fighter Party (EFF), interrupted proceedings demanding President Jacob Zuma repay the country for the millions used to refurbish one of his homes.

Zuma’s own government investigators have determined wrongdoing, although no consequences have followed other than Zuma vaguely promising that he will repay. (Zuma’s life as president has been one scandal after another.)

The Speaker of Parliament then instructed the EFF – properly dressed in reddish orange jumpsuits – to shut up. The EFF refused, the decibels were raised, and then the Speaker ordered Parliamentary security to forcibly remove the EFF.

Later EFF leaders claimed seven of its members were injured by security officials.

A much more respectable party, the Democratic Alliance (DA), came to the party all dressed in glamorous black as a symbol of the death of democracy, then walked out en masse after the eviction of the EFF.

Parliament was left with the ANC and a handful of stringer-on parties, like the communists, and President Zuma dutifully continued his very boring address.

Media has pretty universally now termed last night as “chaos.” It wasn’t. It was theater.

Important security officials in the government were walking in and out of Parliament as if on cue before, during and after the eviction. Journalists’ phone and video signals were jammed inside the hallowed halls just before eviction. The white shirted bouncers strong enough to shove the EFF out of the hall were not regular Parliament employees.

This was all planned, on all sides, and it was quite a show. In fact South Africa’s State of the Union is a media spectacular not dissimilar to our Oscar’s.

Celebrities arrive wearing outlandish and lavish fashions, dip before the cameras before walking on the red carpet into the hallowed chambers. There was the grandson of Nelson Mandela in a newly created Parisian tailored suit inspired by his grandfather’s tribal garments.

There was the country’s head of the police walking awkwardly to keep in balance her newly polished chest of medals.

And there were the various parties, uniformed in chosen colors in perfectly starched arrays of dissemblance.

“It was a landmark setback for Zuma,“ one of South Africa’s major newspapers claims.

I don’t think so.

It’s just what we always expect from South Africa: just a show.