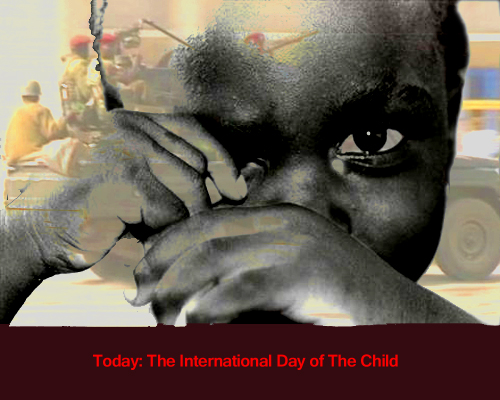 The genie is out of the hell hole, again. Sorry to burden you with another war but Goma fell, today. Rwanda’s imperial strategy worked and a man indicted for Crimes Against Humanity is in control. We’re all so terribly terribly sorry.

Goma is the biggest city (300,000) in the eastern DRC Congo, where the countries of Rwanda, Uganda and the DRC converge. Since colonial times it’s been an important commercial center and crossroads for interior Africa.

And in modern times Goma found itself sitting upon some of the planet’s greatest and most precious treasures: tantalum, uranium, and other unpronounceable and growingly essential rare earth metals. Not to mention such chip-change resources as copper, oil and gas.

Movies have been made, books have been written about Goma. I’ve written unendingly about its importance. If there were peace in the area it would be one of the most important, richest cities on the continent.

As it is, it’s a desperate pauper’s slum for would-be soldiers collecting the world’s discarded weaponry. And there’s a lot of that.

The only reason Goma fell out of the control this time of its appointed government, the DRC Congo, is because neighboring Rwanda and Uganda wanted it to. Especially Rwanda: the country’s paranoid president, Paul Kagame, has become an iron-fisted dictator obsessed that his ethnic Tutsi tribe will never again fall from supreme power.

So the newest unimaginatively named militia, M23, is a remarkably small force (probably less than 1500) Tutsi celebrities. The commander is already a candidate for war crimes in The Hague.

M23 has been nipping away at DRC Congo troops backed by 1500 UN Peace-Keeping soldiers, kilometer by kilometer. Today the prize of Goma fell; it is in the hands of M23.

The age-old ethnic feud between the Hutu and Tutsi is at the crux of the whole problem. For nearly a thousand a years, Tutsi has been the overlords of the much more numerous Hutu, who in medieval times were the farm workers and slaves.

And to a Tutsi overlord that’s quite alright. Because it keeps the peace. It’s the old American southern mentality that the slaves love their masters because the masters provide them with food, lodging and basic security.

They forget about freedom.

Hutu, on the other hand, become enraged, out-of-control predators when given the chance, and on multiple occasions just in my life time have gone on rampages massacring Tutsi, the latest being the now well documented 1994 genocide in Rwanda.

That happened precisely because Bill Clinton refused to increase American support for the pitifully 500-weak peacekeeping force from the U.N. Because he was so embarrassed having lost a dozen or so marines in the fall of Mogadishu, commonly known as Black Hawk Down. He has publicly since apologized for this mistake: And we’ve all been so terribly terribly sorry about what has happened to Somalia since.

Clinton found a willing ally in the French who always supported Hutu, the French who were encumbered by their historical enmity to the Belgians who supported the Tutsi from the earliest times as their own henchmen to keep the troublesome Hutu at bay.

After the genocide was over and the Tutsi with Kagame firmly in control of Rwanda all the great powers of the U.S. and France and even Belgium felt so terribly terribly sorry. They poured millions into the little tiny country of Rwanda. Kagame grew ruthless, jailing his opponents and stifling journalism of any kind. The terribly terribly sorry western powers kept pouring billions and billions into Rwanda: They built McDonalds and call centers and Stella Artois factories.

But Clinton and all the other terribly terribly sorry world leaders forgot about the million Hutu refugees growing mad in Goma and Kivu. So child soldiers were conscripted to machete to death their parents, more rapes occurred than births, drug kings became precious mineral kings. There were more militias with eastern European weapons as big as SAM missiles than teams in the NFL.

Since real trouble broke out in Kivu in 1998, more than 5.8 million people have been slaughtered.

You do realize, of course, that this is more than all the deaths of all America’s wars in my lifetime, the Balkans wars, the current Syrian wars, all the intifadas…

What it approaches is the period of Stalin through the holocaust. It’s a terribly terribly sorry situation.

Principally money from Sony, Intel and Apple that were desperate for the raw earth metals has funded this cesspool of militarism and terrorism. Rwanda was the eager broker, the place to launder the funds. It was always in Kagame’s interest to keep the Hutu in Kivu active.

Meanwhile, Rwanda grew to become one of the cleanest and most modern countries in Africa. And with the most heavily armed and best trained military in virtually all of sub-Saharan Africa north of the great South.

And then tinctures of peace appeared in The Congo in not small part because of the Dodd-Frank bill that restricted Sony, Intel and Apple’s billions. The UN had some success in teaching the Congolese left in Kivu how to grow corn instead of marijuana, and how to bring their buckets of Coltan to a government warehouse rather than into the blackmarket of Rwanda.

Kagame got worried. It was never in his plan that the Hutu would actually become civilized.

So he started funding militias he liked. He started stirring up trouble until he found in that cauldron of opportunity a nice tall Tutsi he could trust. Commander Bosco Ntaganda, dutifully indicted by The Hague for war crimes, was the perfect candidate.

Then, with little resistance from the terribly terribly sorry western powers, he maneuvered Rwanda onto a seat of the Security Council. All was in place. Today, Ntaganda governs Goma.

There is, of course, a historical explanation for this mess, and it rests squarely with Belgium.

The former colonial power’s king was a masterful scam artist. King Leopold wrecked the Congo and raped its treasures from the getgo. In order to accomplish what probably was the greatest colonial scam in history, he created the mega myth known as “the country of the Congo,” which should never have been created in the first place.

Between the eastern sliver of precious earth resources of which Goma is the center, and the principal commercial and the developed regions of the capital, Kinshasa, there is … well nothing but impenetrable jungle. For a 1000 miles. For the distance from New York to Des Moines there is nothing but tangled weeds, swamps, marshes, malaria, heat and pristine jungle.

The geographical imperative makes Kivu and Goma truly more a part of Rwanda or Uganda than a society whose nexus is divided by a thousand miles of impenetrable jungle.

So terribly terribly sorry Belgium formerly apologized to the Congo in 2002.

And today Goma sits as the center of a new … something or other. Succeeded section of the country? Mafia headquarters? Wars-Against-Humanity criminal sanctuary?

Or, new colony of Rwanda.

We’re all so terribly terribly sorry.