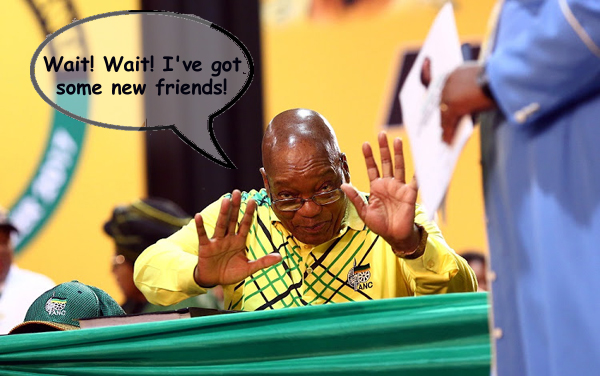 The South African president – despised in every corner of his land while retaining the steadfast loyalty of an enraged minority – was thrown out yesterday afternoon, or more correctly, the process began to oust him. At last! you exclaim, a unified South African sigh of relief and joy? Not quite. The opposition is remarkably subdued. It seems they believe that might have lost all chance of coming to power now that their one-and-only issue is moot.

The world today is filled with nutty leaders – more than I’ve ever known in my lifetime. Most of them wiggled into power a decade ago.

Some of them, like Jacob Zuma, looked hopeful in the beginning. Others, like Toronto’s mayor Rob Ford and Maine’s governor Paul LaPage were known as bimbos from the start.

Then we went through a period of terror when truly nefarious people like France’s Marie Le Pen and Australia’s Tony Abbott and Jim Molan ascended high enough to really threaten the destruction of countries.

Today it’s nothing short of terrifying with people like Austria’s Heinz-Christian Strache.

Meanwhile back on the ranch bimbo became buster and we got Trump.

The fog is lifting. We’re beginning to understand what’s happened.

These radical if fringe, totally unqualified people achieved power through a combination of the electorates feeling so confident in themselves that they were willing to make a big bet, and clever manipulation of the democratic system.

It happened in South Africa almost a decade ago. The country was doing so well that despite the clear failings of the party in power, the ANC, there was such nostalgia for the Mandela story, such pride in its success, that the electorate took a big gamble and supported Jacob Zuma for president.

Zuma falls into the bimbo category and everyone knew it at the time. But the electorate gambled that he would be controlled by the good guys in the party and he’d never be able to overshadow the powerful history of the ANC or its time honored stellar objectives.

The electorate lost the gamble. Five years later the country was a mess, scandals were so overwhelming there was news fatigue throughout the country, and everything seemed in place to get rid of This Mistake.

Instead, The Mistake with his technocrats gamed the system, shuffled the bureaucrats like a pack of cards mastered over by the world’s finest magician, dolled out largess and promises to a now aching constituency, ranted against “outside” threats (largely immigrants), inveigled so flipped his supporters from what they thought they were for and made them against it … Did all those crazy things you can do with democracy.

And he was elected again.

But the rot of Zuma’s administration was infective. In the last year or so it started to grow like an uncontrolled mushroom in a rainforest. “Good intentioned people” were being caught up in his slavish schemes, and lest the whole ANC go down the drain, the ANC party itself finally decided to do something.

As in many parliamentary systems, the chief executive serves at the will of the people (election) but also at the pleasure of her party (the ANC). The ANC has told Zuma to step down. (Will the Republican Convention of 2020 tell Trump to stand aside?) Zuma won’t. He can refuse. Constitutionally only Parliament can oust him.

It’s a much kinder process than impeachment, and it’s done more often for political matters than impeachment’s obsession with crimes. But it’s the same thing. Parliament votes a “No Confidence” measure, and the government collapses.

In South Africa’s case the Speaker of Parliament then becomes Acting President and is charged with forming a new government which will regain Parliament’s “confidence.”

But wait a minute. What if…

Parliament doesn’t move a vote of No Confidence?

Exactly. What if… Pelosi scrambles efforts to impeach with Ryan ramrodding to do so just before the next national election?

“In truth,” said a high ranking ANC loyalist yesterday, “the opposition don’t want him [Zuma] to go….he is actually their best campaign weapon as 2019 elections approach.”

This is democracy? Show-and-tell.