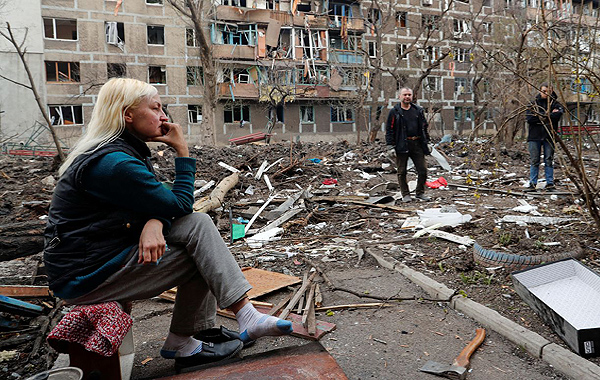 It’s very hard to write in a public forum about anything other than the Ukrainian war. Referring to my own interests rooted deeply in Africa can’t assuage any of the guilt that we’re not doing enough to stop this monstrous conflict.

They say age increases paranoia: Thousands of memories of African dictators and gruesome conflicts sweep through my head, but nothing rises to the destruction in Ukraine. I don’t feel this way because Ukraine is a “white man’s war” or because Ukrainians seem to be more culturally and economically aligned with my own privileged ecosystem than the good citizens of Uganda fighting the LRA. That’s hogwash.

The kidnapping, rape and physical mutilation of children by groups like the LRA seemed at the time to have no match in history or any future of humankind. The heads I saw impaled on the Addis Hilton Hotel flag posts exhausted any extreme definition of macabre cruelty. My own anxieties being thrown into a couple African jungle jails and my short “house kidnapping” in Nigeria stretched my sanity to its limits. But now…

… this is at least quantitatively worse.

War is war. Rape is rape. Genocide is much simpler to define than cable news pundits suggest. Much about the Ukrainian war exactly resembles qualitatively so many of the conflicts I lived through in Africa.

It begins with clear right and wrong. But it never ends without extraordinary courage.

You don’t kidnap, rape and physically disfigure children. You don’t decapitate heads and stick them on flag posts. You don’t send a missile into a children’s hospital: the chance that’s an errant miscalculation or failure of technology is absurd. It was consciously aimed there.

Man’s inhumanity against man was tested again and again during my long life in Africa. It got better. And horrifically, the fortune was that the resources for these acts of dehumanizing aggression were relatively small.

There was one big fight: The largest tank battle on earth in the mid 1980s in the deserts between Ethiopia and Somalia was actually a proxy war between the U.S. and the Soviet Union. It came to nothing. What can you do with a sand pit the size of Maryland?

Hundreds of tanks were destroyed but fortunately the big boys chose to duke it out in a desert. Few lives were actually lost. Besides this one disjunct human battle you could wrap up all the evil conflicts of Africa in my lifetime and it doesn’t reach the level of the current Ukrainian conflict.

True, the aggregate miseries of Iraq and Afghanistan approach the moment. And especially if you weave in Bosnia and the earlier history of Vietnam. But Ukraine condenses that half century of immorality into a moment defined by the potential for nuclear self-destruction.

So when I learn that the United Kingdom in its relentless struggle to retain class distinction is going to send African migrants to Rwanda to relieve its own burdens, I don’t know how to scream how wrong that is without screaming first that somebody better save the children in Mariupol.

I’m just an old man with many memories, good and bad. Until now the good ones well outnumbered the bad ones. Those younger of you may not yet have learned that the way to make good decisions lies in admitting the bad decisions already made.

Nuclear deterrence was a bad decision, and it was made when I was a school child. Nothing in human history gives moral license to war like nuclear deterrence. No logic reaches any other conclusion than that it will ultimately occur. Unless the stockpiles of destruction are rusted or imaginary, they will eventually be used. Deterrence makes no sense otherwise.

So that bad decision must be corrected or humankind is doomed. Deterrence must be challenged, because ultimately it has to be or it doesn’t exist. The best of humanity in my life time will be when enough collective courage is mustered to do so. And the moment seems at hand. Ukraine needs a no-fly zone and a bunch of bombs to scatter Russian tanks. If we can’t do that then all the big tears that many of you shed for the poor child soldiers in Africa were just a bad joke.