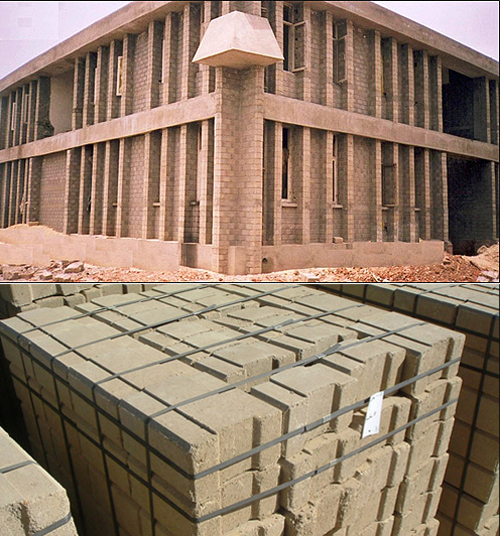 The process which has been known since the late 80s is only now gaining traction and some economic viability. Fairly expensive but remarkably mobile machines that operate on diesel or electricity compress soil and other ingredients like ash and cement into interlocking bricks that are assembled with no mortar or further fixatives.

Most of the machines can produce one brick every 14-15 seconds, thousands of times faster than traditional kilns.

The final structures are remarkably durable and sustainable, and greatly reduce the need for inorganic materials while totally replacing the fired kiln, thereby protecting forests.

The newest machine started production in Karatu, Tanzania, last week. The area has soil perfect for making bricks, although until now these were all fired in a kiln, threatening the forests around Ngorongoro Crater.

Introduced by a local NGO, Hifadhi Mazingira (HIMAKA), the bricks are sold at a quarter of the price of traditional fired bricks provided the consumer first plants a certain number of trees based on the size of his purchase of bricks.

“We imported the Hydra-form brick making machine from South Africa to produce bricks that can be sold at very low costs of 250/- per piece compared to the usual brick prices of 1000/- or more per brick,” the NGO’s founder told a local Arusha newspaper.

According to the South African manufacturer, 2500 bricks requires 10 liters of diesel. Carbon emissions compare favorably with the wood that would otherwise be required to fire the kiln for the same number of bricks, and the cost is much less.

According to an official of the Ngorongoro Conservation Area Authority most existing tourist lodges in the area used a minimum of 20 acres of trees to fire the kilns that created their bricks. As a result, new tourism initiatives are being directed to the interlocking hydraform bricks.

The product has found wide acceptance in India where the soil is appropriately “red” or heavily laced with copper, as in the case of Karatu, Tanzania.

Initiatives like these come to the fore when economies move them there. The price of wood in Tanzania has skyrocketed recently, because of rapid depletion. But whether hydraform bricks are really a better idea and more environmentally friendly than something else, like simple pressed wood or artificial fibers, it’s clearly a step seeking a right direction.