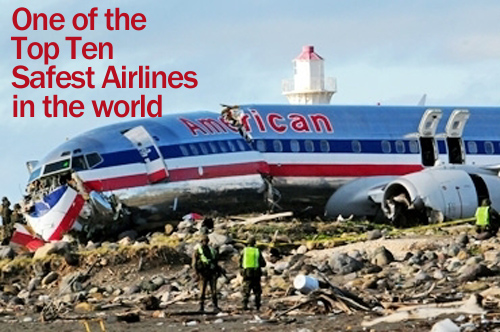 The airline you’re going to fly next week isn’t considered among the safest? Should you cancel? And what was that report out this week?

There is enormous confusion over the report widely circulated in the media this week routinely labeled “The World’s Ten Safest Airlines.” The report is an annual one from the Geneva-based Transport Rating Agency (ATRA).

No, I’m not right away listing the ten “safest airlines” because I think for us average travelers it’s a bunch of malarkey. It might have some usefulness for large groups of travelers negotiating a corporate rate structure, or for potential mergers and acquisitions, but for Joes like you and me, forget it.

Here’s why. The analysis was done on only what ATRA calls the “100 most important airlines” without explaining what it meant by “important.”

According to Wikipedia, there are 5,663 airlines in the world. That means the analysis didn’t even consider 5,553. JetBlue, for example, wasn’t considered important enough.

The report is a for-sale report from a profit making consulting firm. It’s sort of like Americans for Progress rating the best Congressmen.

I don’t think ATRA is necessarily political, but it is interested only in the Big Guys. This is because their customers aren’t interested in Ryan Air or Kenya Airways. Or, for that matter, Qatar Airlines, one of the finest carriers in the world.

Click here for what I use to determine if an airline is good or not, the StarRanking. Now admittedly, the star ranking – or quality rank – theoretically doesn’t measure safety. But I think the correlation is obvious. Any business that invests enough to make it noticeably better than its competitors is likely to invest enough to preserve itself well.

A major difference between ATRA and StarRanking is that StarRanking applies no filter of “important airline” to its analysis. Can we even guess what ATRA’s definition of importance is?

In several examples snipped out of its expensive report it’s clear that LARGE means IMPORTANT. If you aren’t among the 100 biggest airlines in the world, you won’t even be considered.

It seems to me that if you want an indication of safety, you find out which airline has had the most crash fatalities. The list of the top 100 fatal airline crashes shows American Airlines right up there with 4 crashes and 55 fatalities, Delta and USAir each had a single crash with more than 130 fatalities, and Air France had two crashes with 358 fatalities.

All four of those airlines are in ATRA’s list of the top ten safest airlines.

OK, I’m playing with statistic a bit. The many airlines with no fatalities whatever are mostly smaller ones and just by that fact have a lower probability of disaster. But there are a few, like Air Jamaica (which has been in business since 1966), Air Seychelles (1985) and Virgin Atlantic (1984) which by both the standards of safety and service would probably win an individual travelers’ loyalty over any of the Big Guys.

The overall winner, by the way, is Pluna Airlines. This little Uruguay carrier has been flying since 1936. No fatalities.

So unless you’re a Fortune 500 or traveler who’s rarely at home, forget about this report. There are better ways to figure this one out.