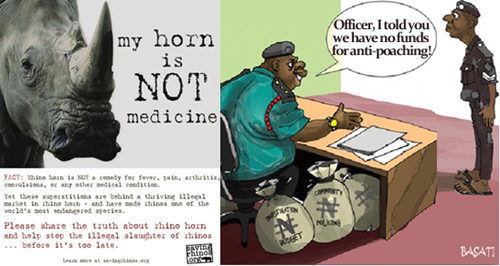 Despite my better reasoning I can sympathize with poachers just trying to survive. But when rangers and other paid officials participate in the crimes, my blood boils.

Several weeks ago Serengeti officials admitted that two of the Moru area’s 31 black rhinos had been killed by poachers… in April! We probably wouldn’t even have learned of this if the Member of Parliament for the area hadn’t announced the killings at an irate press conference the end of last month.

There’s only one reason park authorities kept the lid on the story: they’re a part of it.

When the Minister of Natural Resources & Tourism read about the MP’s press conference, he immediately fired 4 park officials and suspended another 28.

And I won’t be the least surprised if all the posturing, firings and elaborate news conferences are simply part of a smokescreen to hide the culpable.

The demand for rhino horn is skyrocketing as Asian economies emerge from the recession. The main markets for rhino horn are Vietnam and China, where apothecaries use them in combination animal powders primarily as fever reducers. Ever heard of aspirin?

The great irony is that the rhinos which were killed were progeny of black rhinos removed from the Serengeti more than 20 years ago and nurtured in South Africa as a strategy to protect the species when poaching was simply out of control.

I remember in the early 1980s when I was with one of my photographers in Lake Manyara on a routine photo shoot. He was an ex-Marine and hunter and as we were inconsequentially continuing down the lake side road we saw a mid-size rhino dead in the grass.

Ken, my photographer, got out of the vehicle and examined the very recent kill. The horn had been sliced off, but he believed he could tell the type of gun which had successfully made the heart shot.

We raced back towards park headquarters and passed some rangers walking along the road. I stopped the vehicle to explain to them that a rhino had been poached several miles back, but they insisted they knew about it and that it was a natural death.

Meanwhile, Ken was whispering in my ear that they carried the guns that killed the animal.

The temptation of insiders to stage an in-house crime increases as the loot does, and right now the loot is high as regards rhino horn. It was back then, too, when ranger salaries were so pitifully low. By our standards they’re still low, but nowhere near where they were, and now many would argue quite reasonable.

But what isn’t reasonable is what Asian consumers will pay for pulverized carotene of priceless, endangered animals, to use as medicines that don’t work. Much less the governments complicit in their crimes.

There are many more people wrapped into this evil doing than the simple poor two rhino that were killed.