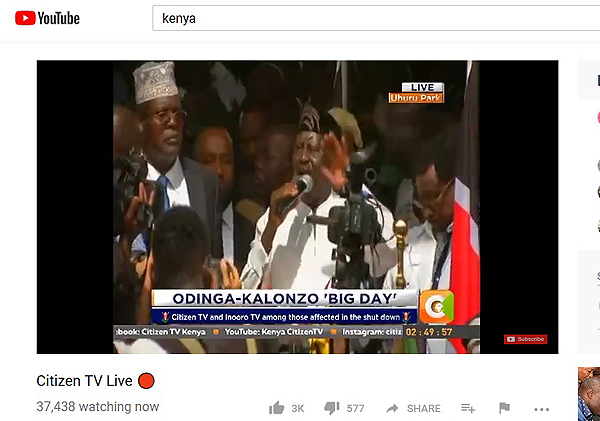 Raila Odinga’s unexpectedly short mock swearing-in ceremony as Kenya’s “Peoples President” in central Nairobi today marked the end to his long struggle for power. Not even his designated vice president showed up.

Many thousands of supporters filled Nairobi’s central park clearly hoping for the start of a prolonged if violent struggle but dispersed quietly after Odinga hopped into his car and sped away hardly a half hour after he had arrived. By late afternoon it was business as usual in downtown Nairobi, and the real government was suddenly more stable and powerful than ever.

What Raila Odinga did, today, which was exactly what he had announced he would do, was labeled “treasonous” by a spokesman for the Kenyan justice department. Treason, under the constitution Raila took such a large part in writing is punishable by death.

It would be ridiculously reckless for the Kenyan government to pursue this. Raila may have been sidelined today – like millions of his fellow western and rural Kenyans – but he remains their spiritual leader. A martyr could indeed pose a real threat to the Kenyan State. Right now all Raila Odinga is is a failed politician.

By the end of the day the controversy had shifted from Raila’s mock swearing-in to the government’s abrupt closure of three of Kenya’s main television networks early this morning.

The closure of the stations in Kenya is much more a symbolic than effective act. Most Kenyans get their TV from streaming sources, and the TV networks following the lead of Citizen TV immediately took to broadcasting through YouTube.

What I and thousands of other Kenyans watched was a very sad and humiliating end to a man’s career. When it was clear after Raila arrived that his own designated vice president wasn’t even there to take his oath, it didn’t matter that the crowds were substantial.

He clearly had lost the backing of even the opposition politicians currently in government.

I’ve written much about Raila Odinga and it’s a fascinating story. Simply search this blog for his name.

Like the father before him his entire life was dedicated to struggling against the small coalition of several ruling tribes that successfully kept western and rural Kenyans from any seats of power since Independence.

You can see the result of that today in the stark contrast between Odinga’s home, the city of Kisumu, the Lake Victoria port and once a near equal to the capital, with Nairobi today. Nairobi is a massive, major, modern, swinging, busy and productive metropolis. Kisumu is now a dusty, dilapidated big town mostly in disrepair.

What was originally nothing more than a tribal divide at Independence, Raila mastered into viable social policy differences. He grew opposition politics beyond tribal barriers. Many of us very much supported his progressive views, including radical redistribution of land and a sort of affirmative action for national infrastructure that would have spread the foundation for development all across the country.

Several times his message resonated extremely well with younger Kenyans. The 2007 election was so close it resulted in several months of violence and mayhem and ended with a power-sharing arrangement where Raila became Prime Minister for five years.

Personally I think that’s when he lost his future. He fell victim to all the trappings of nepotistic power and shiny black Mercedes. His social messages diminished. He seemed to give up rallies in the slums and countryside for limelight cocktail parties and international celebrity.

After losing the next election by a hair and losing a Supreme Court battle he seemed to get back onto the wagon, and his firebrand support for the downtrodden was renewed. But his message now seemed hypocritical. He couldn’t hide his personal history.

Moreover as Kenya regained its prosperity and the world turned increasingly conservative after the failures of the Arab Spring, progressive politics in Kenya took on something of a xenophobic character. Big business and the age-old coalition of the several ruling tribes prevailed.

Through three more elections – one that was recalled by the Supreme Court – and numerous court battles, Raila always lost. I don’t think there’s any reasonable observer who doubts the veracity of these democratic outcomes. Democracy is often vicious and it’s often wrong, and in today’s world that’s been the situation in numerous places around the world. Example: Donald Trump.

Perhaps like America’s current democrats Raila sensed the tide was changing and thought today’s antics would become a major turning point in Kenyan politics. It was, but not the one he expected. Today turned out to be the day that Raila Odinga ended his career as a politician.