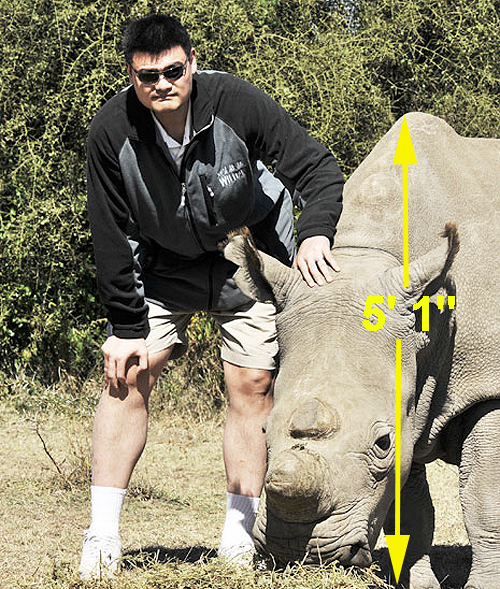 Yao Ming, the former Houston Rockets skyscraper, is trying to do what no Chinaman has done before : sensitize his countrymen to African conservation.

Ming retired as the awkward but successful 7’6″ basketballer last year and has been judiciously investing in a way definitely not characteristic of most sports stars. His current job is filmmaker, but it’s hardly more than a vehicle to deliver an unsavory message to his fellow Chinese: stop consuming animal products.

Ming is well known for his home town generosities and stardom throughout China. Injuries forced an end to his career last year, but injuries that many sports figures would have surgically corrected for a short-term sprint that ends them in a wheelchair when they’re 45.

Ming, instead, walked away from a salary that ESPN claimed would have been $17,686,100 for another 2012 season. Since then his endeavors have included buying a Napa vineyard and starting a wine export business to China, buying and coaching a Chinese basketball team and now, starting a film career.

Ming is currently in Kenya where together with American producer, Jay Cohen, he is producing a wildlife film mostly for Chinese consumption with the rather cliched title, “End of the Wild.”

Bundle this together with his decision to be an ambassador for WildAid and his appointment to a Chinese communist party committee in his hometown, Shanghai, and I think we have a man who is tall enough to bring two worlds together.

Wildlife conservation is not a Chinese passion. In fact, most of Asia has never viewed nature with the same reverence or awe as we cowboys. These older and more established cultures have sort of put nature in a picture frame rather than accepted it as something untamed.

For probably a millennium the unique characteristics of many animal horns and antlers have provided accomplished Asian sculpturers with a media that can be found nowhere else on earth. Ivory is the only natural substance that allows such intricate sculpting.

I think that one of the reasons contemporary wildlife conservation has had such a hard road into Asia is that the most vocal of western conservationists are evangelical ideologues. Not that their foundation that preserving any form of life is not a viable first principle, but it completely ignores or at least leapfrogs the compelling science for animal conservation.

And that ideological position at the level of first principle does nothing but start a fight with opponents who cherish other first principles, like the preeminence of man.

More patient science shows us that even the simplest of life forms is so incredibly complicated not even Watson can replicate it. And this means we don’t know everything about it. And this means if we wipe it out, we’ll never know. And this means all sorts of knowledge, and knowledge specifically beneficial to humankind is lost for good.

Once that horror is truly understood there is a reverence for “what is living” that might come full circle to PETA’s mania. But it is the evidential science that will win over the majority of the world to wildlife conservation, not the simpler battle cry.

That’s why Ming’s old hat title of “End of the Wild” may mean something to a Chinese society that is only recently emerging from their cocoon.