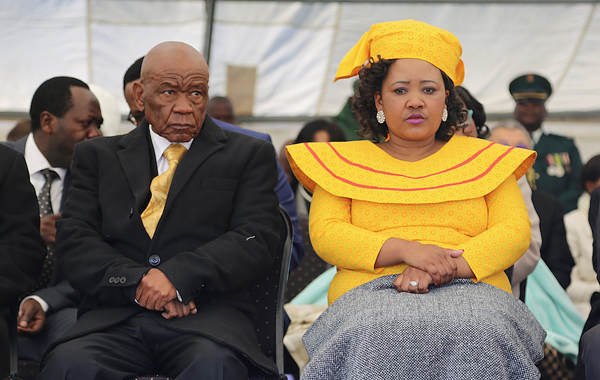 In a little pinpoint of country high atop rugged mountains, isolated from most of the world socially and politically, a prime minister charged with murdering his wife invokes a Trumpism to ensure his freedom.

And the Trumpism isn’t even that; it’s a dead-out Americanism raised from hibernation by America’s radical right: i.e., the head of state can’t be prosecuted.

In the dead of winter 2017 on a hill on a mountain in Lesotho, eight gunmen rammed down the front door of “state house” and shot to death the country’s First Lady.

Shortly after the funeral the 76-year old prime minister married a woman decades his junior.

Five days ago Lesotho police charged the now 80-year prime minister for murder and his current wife for ordering the murder.

Four days ago the prime minister skipped out of the country.

Three days ago the chief justice of the Constitutional Court suggested that a head of state can’t be prosecuted. Wonder where he got that idea?

So bingo tingo, Prime Minister Tom Thabane appeared in court today to receive his charges and defend himself against this scandalous witch-hunt by his most evil of opponents.

Seated proudly next to him was his elegantly dressed wife. According to Lesotho legal unprecedents, the issue of the trial now goes immediately to the Constitutional Court.

Lesotho has had its bucket of undeserved troubles for centuries, starting with an arid high altitude climate that challenges the best of agriculture. Its population has declined as the rest of Africa has increased, and nobody wants much to do with the place except motorcyclists who crave its high altitude Sani Pass route.

It’s about the size of Maryland with a population of just over 2 million, many of whom work and live much of their lives in South Africa, which surrounds it. For clever folks it makes a useful tax haven.

This retracted state of affairs has led to a place of great corruption internally, but which from the outside no longer seems very great.

But corruption isn’t always judged by its size.

The far right is the far right everywhere. It differs from the far left in being racist, inhumane, xenophobic and … very more corrupt. The nexus of successful corruption is as instantaneous and ever-reaching as the coronavirus.

So it’s no surprise that Prime Minister Thabane has taken his lead from page one of the Trump Playbook.

Maseru isn’t quite Broadway, but it will do. Shoot someone and get away with it.