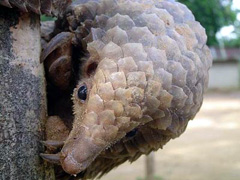 Yesterday a fight nearly broke out between residents of Mangola town, about 10 miles west of Karatu towards Lake Eyasi, when conservation officials removed a pangolin that had been found by villagers.

I’ve never seen a pangolin in the wild, and its cousin, the aardvark, only twice.  Both are common animals and their rarity comes from the fact they are so incredibly nocturnal.  Like vampires, they will actually wilt in the light, their eyes are so sensitive.

Both feed on termites.  Both have massive claws and ludicrously long tongues to nip white ants by the hundreds.

The rains which have come in spades lead to huge increases in the termite populations.  The rains also flood holes that pangolins and aardvark live in, flushing them out despite their better natures.

But unlike the aardvark the pangolin is an animal of great mystic stature.  It has little fear of man, is rather slow moving, and protects itself and any young clinging to its scales by rolling into a near perfect sphere and closing itself shut to the outside world.

And more to the point, villagers still believe its appearance presages great fortune.  The Malonga villagers tried desperately to figure out if this just meant more rain, better harvests, or new roads.  They put out a pile of corn next to a bowl of water next to a pile of asphalt, peeled the animal apart, and nudged it to move as a choice of one or the other offerings.

Peeling it apart is no easy task.  The scales are sharp and the pangolin has an anus gland not dissimilar to the skunk.

The pangolin chose the maize, or so it was determined, meaning that the future held outstanding corn yields.  The Chicago mercantile exchange didn’t move much, though.

And as they were trying to unpeel it for a determination of second place, Ngorongoro Conservation Authority rangers arrived just in time to rescue the poor animal from the medieval performance.  At one point, machetes were drawn against rifles.  (Probably neither worked.)

“I have been a conservationist with the NCAA for almost twenty years now but throughout this period I have never encountered a pangolin. I think this is the first such animal to be seen in the neighborhood,” he said.

But all was cool in the end, and pangy was taken to the nearby forest and released.

“We couldn’t keep it, because we don’t have a cage,” Mr. Amiyo explained.