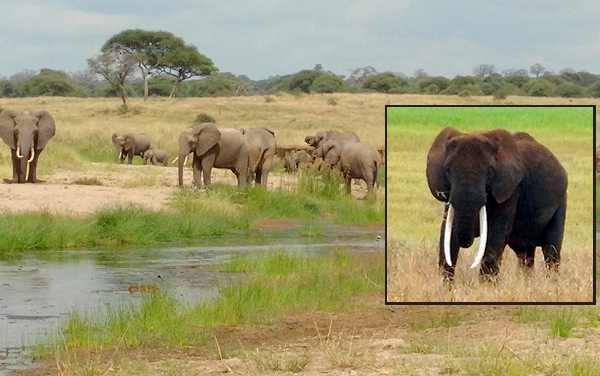 Our safari ended in Tarangire, Africa’s greatest elephant park, with an exciting surprise! I’ve been coming to Tarangire regularly multiple times annually for the last two decades. This is the first time I noticed that elephant tusks are getting bigger!

Whoa nelly. There’s no tonic that makes elephant tusks grow larger – it’s completely genetic. Nor did the 40-year old male that stared me in the face, or the 60-year grand dame who almost brushed the side of our vehicle, each with tusks easily 50% bigger than the norm recently visit a stretching spa. Bigger tusks are a genetic imperative, and there has now been enough non-poaching time for big tusks to begin expressing themselves again noticeably in random populations.

It was a surprise because my presumption was that it would take three or four generations of ele before what I saw these last two days in Tarangire could happen. That’s at least 60-100 years (10-15 years to puberty plus another ten years of growth).

The worst of the horrible years of poaching was in the 1980s. The presumption was that the return of big tusks would manifest in newborns that benefitted from the right genetic combinations, which would prevail because the longer a tusk an elephant has, the more successful his/her breeding potential becomes.

So where did my thinking go wrong … presuming my anecdotal observations are correct and not just an anomaly?

First of all let me remind you how poaching reduced the size of elephant tusks. I remember standing on my balcony at Lobo Lodge in the Serengeti at night and listening to the whoaz-whoaz-whoaz of the Sikorsky helicopters that were deployed mostly from the Gulf.

When they found an elephant family, they hovered and threw giant spotlights on them. After a few minutes of assessment, they decided whether the tusks were big enough or not. If satisfied, the bazookas and destruction followed.

Perhaps some big tusked elephants successfully hid from this slaughter. We know for a fact that they did in the crater, where all the old fogies are almost all gone now and where for some reason after poaching ended and new females appeared in the crater, they still didn’t breed.

So if some ele were capable of finding refuge in the crater, certainly they must have been able to find refuge elsewhere as well. Perhaps what I’m seeing is those who successfully removed themselves from observation now returning.

Or… maybe the genetic manifestation occurs more quickly than my gross calculations.

A day of viewing ele as we did in Tarangire is proof enough of how critically important tusks are.

Even though Tarangire at the moment is wetter than usual, many times we watched ele digging for water in the sand rather than just going over to the occasional streams of water and drinking. This could be hard-wired into them, but water dug from the sand river is much purer than surface water, so much healthier.

We were captivated by one fight between two males of about the same size and age, not quite youngsters anymore but still acting like teenage hoodlums. They stuck each other’s sides, deflected charges with their tusks, and swung about as if clearing the air of any challenge.

The matriarch of each family often governs which males are allowed into the family to breed, and of course the stronger males normally succeed. Strong in ele terms includes big tusks.

Moreover, we came across one family that was nearly tuskerless, a living legacy of those horrible years of poaching. I think that as old as the oldest ones looked, they were much younger than their appearances suggested.

Even the young looked weaker. So perhaps poor tusk size resulted in not just less breeding potential, but earlier deaths, weeding the population even more of bad genes.

Undoubtedly of course, it was all the above and more. I’m certain, too, that since I never expected to see large tusks again, it’s likely in my past safaris that I missed them or sort of subconsciously dismissed them.

And of course it remains to be seen if my anecdotal observations are correct. But if so, it’s extremely good news not just for the ele but the greater veld and ecosystem that depends upon them.