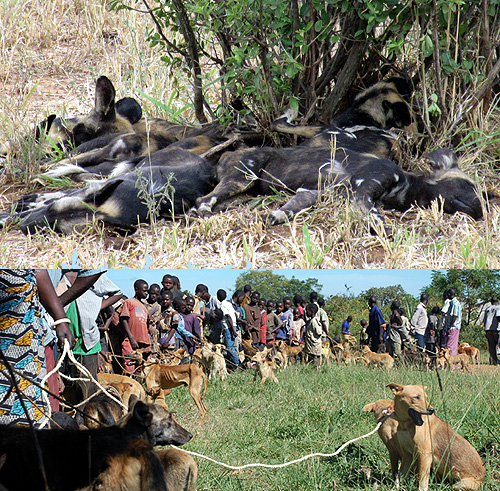 The top half of the picture above shows a portion of that family zonked out towards the end of the day. They’d killed that morning and were basically sleeping it off.

I think this marks the turnaround point for wild dog, and the successful work that several American zoos have been doing to stabilize their populations.

Zoos like Chicago’s Lincoln Park Zoo have painstakingly convinced Maasai who live on the periphery of the park to get their dogs vaccinated … free. It’s no easy job. (See bottom half of picture above.)

But the hard work has paid off. By vaccinating the peripheral dogs, wild dogs are staging a bounce back more resilient than expected.

Our safari stayed in the center of Tanzania, which I do with some trepidation this late in March because of the rains. But this year it’s been unusually dry. It’s not yet a crisis, but the veld looks like October more than March.

The Silale Swamp was only half green. We experienced sprinkles and I kept looking at the sky’s growing clouds wondering if the much needed rains would return.

It was also unusually hot. Humid, hot and extended dry conditions means more tse-tse and it was really among my worst experiences. But my travelers were incredible, never complaining, spraying on the DEET and getting on with the business of game viewing.


It was fantastic. Tarangire rarely disappoints because of its enormous elephant population, but we had a gorgeous view of a nearly full grown male leopard in a tree right beside the road within about ten minutes of starting our game drive!

We’d flown into the Kuro airstrip so we were in the midst of the park. The leopard was in perfect view on a dead tree looking with aggravation at a nearby herd of impala. I say aggravation because he, too, had a giant belly and had no need to hunt.

We had a single encounter with truly wild elephant that are mostly transitory south of the Kuro airstrip. It was hilarious. We rather surprised a single family, and one female who was nibbling on a smaller acacia tree was so startled that she ripped the entire tree out of the ground and ran off!

The hundreds if not thousands of elephant we saw were mostly the sedentary group north of Kuro. They tend not to move in and out of the park, content with the space and habitat. More docile than very wild elephant, it allowed us numerous wonderful encounters.

I think everyone was particularly pleased as we watched three very young elephant rough house for nearly 15 minutes.

They “jumped” on one another, rolled each other, butted each other … I put quotes around jump because that’s virtually impossible for an elephant to do, but I really believe I saw that youngster fully airborn if for only a nano second.

I’ve noticed that most of the southern European and western Asian bird migrants haven’t yet left (like the Eurasian Roller and Steppe Eagle [buzzard]), whereas most of the central and northern European migrants have (Adim Stork, Eurasian bee-eater). Don’t know if that means anything – please leave a comment if you think you understand this.

We left Tarangire hurriedly so that we’d have enough time to see Manyara from top to bottom, entering from the remote southern gate. It’s a spectacular drive through rural Tanzanian countryside, including intense small farming of rice and corn.

Manyara, too, was dry but it was wonderful as we left late in the day to see the thunderstorms forming.

Now, onto the Crater! 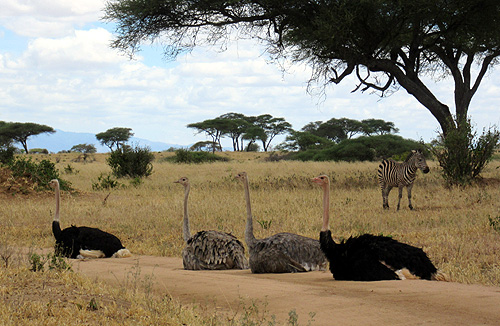