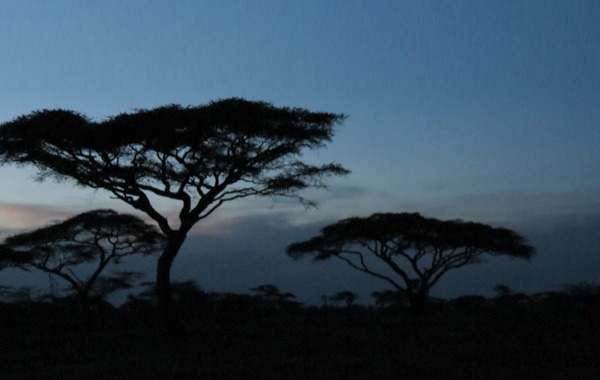 The night was as still as a ghost but inside the mess tent there was almost riotous laughter as the millenials recounted a recent wedding gone awry, the old folks proudly compared whose child was eating the most barbecue and poor Charles, our waiter, searched the back pantries for still another bottle of Spier shiraz.

I stepped briefly outside the warm solar lit canvas box into a crisp Tarangire night. It was a half moon. The thick overcast which begrudgingly was giving way to a long dry season momentarily cleared. Every star in the firmament twinkled. It was so still that the terrifying screeching of an elephant fight made its way all the up from the distant river almost like a far away old-time radio trying to catch its signal.

I’d hardly walked to the camp fire, maybe 15 meters from the dinner party, when the rhythmic groans of a couple lionesses triumphantly walking the main park road back to their cubs announced to any who cared that their kill was over: At least for this night there was no further need to hide.

Tarangire in this cold end of the rainy season is like an old man at the bar. The struggles under massive thunderstorms whose rain nary touches the ground because it’s so hot, the new acacias swept away by flash floods, the endless fighting of the elephant in muskh and the thousands and thousands of open-bill, white and other migratory storks all vying for a piece of the great Silale swamp was over, now. It was time to sit on a quiet stool in the corner and look fondly at your beer as the foamed slowly dies away.

Africa is a cycle of death and rebirth like no other place. It bans our anxieties over the next election, the dumphesses who think they can control the planet and the ticket clerks who can’t find our luggage into some uncertain but undeniable future.

They’ll be another day. The droll almost-hoot of the Verreaux’s Eagle Owl insists (blink). Just rock a little in your chair and let the morning wind warm you up.