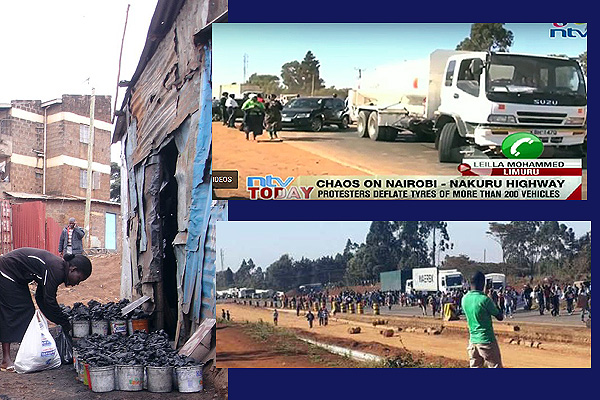 I was in Nairobi yesterday watching a brilliant protest backfire miserably.

“Rowdy Kenyan youths” (as described by the police) deflated the tires of more than 200 vehicles on Kenya’s main highway at the peak of rush hour causing a nightmare traffic jam that backed up the city for nearly a whole day.

The protestors took advantage of one of the many times in Kenya’s morning rush hour when the lines of traffic come to a complete halt.

Dozens of activists – all men with no attempt to disguise themselves – jumped out of the gutters and off walk bridges simultaneously then systematically went vehicle to vehicle, deflating tires.

Probably half of Kenya’s skilled and educated youth is unemployed. One report given to me by a person who wished to remain anonymous said the youth were each paid between Ksh 5,000 – Ksh 10,000 ($50 – $100) by “Kikuyu politicians trying to defame Charity Ngilu.” (More on that below.)

On passenger cars they deflated all four tires. On the massive 18-wheelers transporting tons of goods into the interior of Africa, they deflated only the front two tires. They knew exactly what they were doing, and within minutes as many as 200 vehicles had clogged Kenya’s main highway.

Meanwhile along the many shops and boutiques just off the causeways the “rowdy youth” were passing out professional leaflets asking shopowners to close their businesses and join a nationwide business boycott that would repeat itself every Monday.

It was a brilliant disruptive protest. The issue? Charcoal.

No, not for your Weber. Nearly three-quarters of metropolitan Nairobi’s 10 million people use charcoal to cook. That’s because most are dirt poor, living in slums or one step removed in junky, poorly constructed highrises. Charcoal is how early man cooked and how most Kenyans have cooked since time immemorial.

But charcoal comes from trees and the decimation of the forests in this time of global warming has seriously accelerated Kenyan desertification.

Near where the new desert abuts the remaining verdant land is Akambaland, and its governor is a much respected woman, Charity Ngilu. She has successfully lobbied her legislature to pass laws to protect the last few lingering forests in her lands, but timber poaching continues to provide fuel to Nairobi.

Recently other “rowdy youths” in Ngilu’s Akambaland stopped a large truck filled with charcoal and burned it to the ground. The driver insists to today that the timber didn’t come from Akambaland but further afield where no restrictions are yet in place.

Ngilu who is of a different tribe and different political party than the ruling Kikuyus whose businesses in Nairobi include massive charcoal brokering, was recently summoned before a government commission to answer charges that she paid Kamba youth to burn the charcoal truck.

Ngilu is a good person. I doubt she had anything to do with the burning of the charcoal truck.

Perhaps, but there’s more to it. Most slum dwellers don’t have Ksh 800 at any one time. They buy one of the 20 pails of charcoal divided from a single bag for about Ksh 25 (25 cents). You can’t divide a propane canister into 20 parts.

If you change your habits and cook with propane instead of charcoal you need different tools. There’s no additional heat for Kenya’s freezing June temperatures from the propane flame targeted under the pot. There’s no smoke to keep the malaria mosquitoes at bay.

Wali na maharage (rice and beans) is a Kenya stable, even a modern delicacy when prepared right. But maize is cheaper. Dried corn, and even the dried rice and beans that a slum dweller buys from a dirty market stall takes a lot longer to cook than the fresh veggies available in Nairobi’s super mall grocery stores.

If you were doing it right, not only do you subsidize many smaller more expensive per unit propane canisters, but you give away modern kitchen utensils, subsidize fresh fruit and vegetables and develop a massive public health campaign to stomp out malaria while building well insulated public housing. For millions and millions.

The cost to Kenya from this single national traffic jam day is astounding.

But what if it works, so to speak? What if Charity Ngilu is censored by her peers? What if the charcoal trade gets a boost? What if all of Kenya turns to sand in ten years?