Skip to content
We didn’t know what to do. The super storm had formed so quickly. Should we stay on the hill or hightail it back?

It was our last of four days in the Serengeti and we had enjoyed some of the most spectacular game viewing in the world. But now, the storm threatened all the good memories.

We left camp around 3:30p for the stark beauty of the nearby Maasai kopjes just outside Seronera. In the past I’d seen many lion, cheetah, elephant and of course the ubiquitous reedbuck over these mostly flat grasslands. 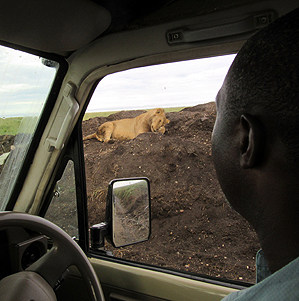 The kopjes were small by the standards of the Gol or Lemuta, but they were very pretty. They were spaced on either side of a great swamp, and we had been challenged finding a way through the swamp to the kopjes side.

Our game viewing had been supreme, truly by my own high standards. But the payment for this unique experience was what we were doing now: challenging the rainy season in a time of mendacious climate change.

There’d been a drought, then floods. The rain which had been so absent for six weeks seemed to now be pouring back in unimaginable amounts.

As we left camp I noticed that two giant cells were forming: one to the east and one nearly straight above us. If they grew together …

We stopped for some lions near the Seronera river. We quickly checked out the rocks where we knew a mother leopard was raising two cubs. Then we crossed the main road and followed the Seronera river to the east.

We had just reached the swamp when I saw the two cells were combining into a super storm. Tumaini raced up about the only hill in the whole area and we took stock of our situation.

I looked at Tumaini and suggested we just stay put, wait out the torrents that were expected and then slide back to camp.


We knew it would be a near catastrophic downpour. The murram tracks in this area were pretty good and while they would rut and splinter, usually a Landrover could travel over them even when covered in water.

But the tracks across the swamp were a different matter altogether. They weren’t murram, but cut over black cotton soil, about the closest thing to quicksand that exists. Add a few drops of water, and you’re sunk on the spot.

Tumaini realized that before I did and in response to my suggestion to wait it out, he shook his head and put the car in gear.

We followed our own tracks back across the swamp and raced as fast as we could back to camp. The rain began all at once.


It was so heavy we could hardly see. The car slid back and forth as if being jiggled in a giant bowl. My window wouldn’t close completely, and waves of water fell onto me. The front windshield fogged up completely as the temperature plummeted. I had to open the side flap window and use my sweater to keep the window as clear as possible for Tumaini.

We reached Makoma Hill where our camp was located. The lightning started fierce, the thunder shook the car.

We had to traverse some black cotton soil here, too. Sometimes the car was racing as we slid near sideways. Headlights were pointless. Tumaini had to just feel the road.

Finally we turned up the hill, and a camp positioned down from ours was the first respite I felt. We were still ten minutes away from our own camp, but high enough that waiting it out now would be OK.

And the storm was relentless, and the rain grew even worse. Tumaini forged ahead and we dove into a part of the road completely submerged, the water above the floorboard. I was actually momentarily proud that we had sealed it so well none seeped into the interior.

The main track into camp was useless, so Tumaini used a back service road. We arrived while the torrents continued to fall. There was only a few moments of more anxiety as we waited for our second car, Justin. When he pulled in, relief was manifest. None breathed more easily now than me.

I walked with Kirsten into the dining tent through heavy rain. We stepped through racing water at least a half foot high. But once inside the tent, shoes and socks peeled off and beer and Amarula in hand, the drama ended as an adventure never to be forgotten! 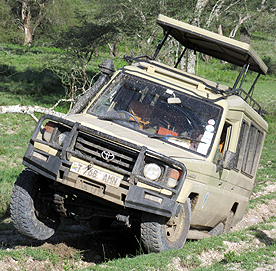 Later I would inappropriately bristle at Theresa’s remark that this is why people avoid the raining season. I bristled because in normal times, super storms were about as rare as a white elephant. Well, maybe not quite as rare, but you get my meaning.

Now perhaps I have to concede that super storms in the rainy season might be the new normal. Climate change is devastating here. Obviously, everyone loves the rains, but when they come all at once the veld floods, the washes carry away the soil, new plants die, animals flee the standing water.

All that was yesterday afternoon.

Today we left the Serengeti and took our first game drive in the crater. The drive back to Ngorongoro was truly breath-taking. I’ve rarely seen the veld so absolutely beautiful, glimmering in every shade of lustrous green you can imagine.

Maasai seemed jubilant. The herds were grazing to the fill, as were the neighboring zebra and gazelle.

Tomorrow, our last game drive: dawn in the crater!