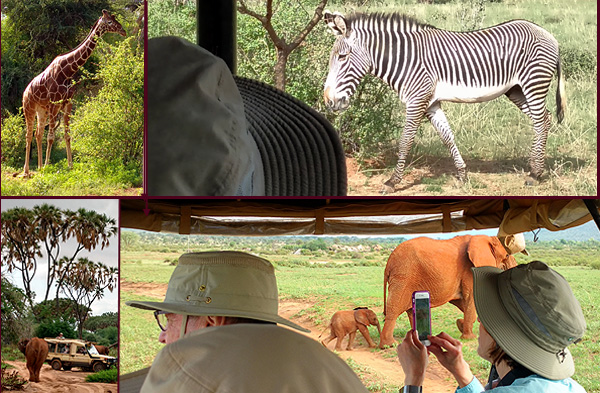 Grevy’s and twigas and giant hogs, oh my! We got almost all of them! The point of the Kenyan extension to a big game safari in Tanzania is to see all the unusual and rare game not found in Tanzania.

The Aberdare National Park is a highland rainforest. There are several in Tanzania, but none as large and none that still have the rare game we saw there. In Samburu, a remarkable ecosystem at the very edge of the great desert, dozens of animals and birds are found nowhere else.

We did exceedingly well. See my blog on the Aberdare. My clients got photos of almost everything rare and endangered. Today we completed the second half with stars!

We left before dawn around 6 a.m. Before the sun even rose the bird song was incredible. Samburu contains roughly the same number of species as the entire Serengeti, yet it is less than a tenth as large.

As soon as there was light enough to see we had dik-diks all around us! Then with the sun pancaking out of some deep overcast, we entered the actual national reserve and almost immediately saw the peculiar gerenuk, a long-necked antelope found only in very arid regions.

By the way, the rains had beautified this “arid region.” It was beautifully green. There was no dust, but dozens and dozens of wild flowers.

Not long after the gerenuk we found the Beisa oryx. This incredible creature leaves everyone thinking they’ve seen something big. It’s actually pretty small for an antelope, but its huge straight horns make it seem large, which is exactly the “point.”

Those horns long before they might stick it to a lion make the lion think twice!

And hardly a second after leaving the oryx we saw up close a Grevy’s zebra. It’s really ironic that my clients on this trip see a Grevy’s before the ordinary zebra! I expect we’ll see tens of thousands if not hundreds of thousands of zebra in Tanzania – all common.

The last scientific count in 2016 put the Grevy’s numbers at 2,350 total for the planet, and virtually all of the wild ones are found in Samburu and further north. To find one so soon on our game drive was amazing.

Watching the poor beast you can understand its plight. It has the ambition of an anemone, the speed of a arthritic lapdog and the nimbleness of a snail. It’s much more like a donkey than the zebra most people know.

Right after the Grevy’s we saw what was the first of at least 50 reticulated giraffe. Mindful that these are no longer considered a giraffe subspecies, but a species entirely unto itself, this was a wonderful treat.

We saw the first group at a distance and Simon, our incredible Samburu driver/guide, was inching up to them through the bush when he suddenly made an unexpected right turn. I saw folks’ faces fall.

But there was reason. Over there, guys, was an absolutely beautiful male cheetah in his prime! His belly suggested he’d killed a day or two ago, so he wasn’t hunting, just patrolling. He spent a lot of time marking his territory…

…Which included jumping up on a log and posing for the cover of everyone’s African photo books!

Simon then took us down to the river. Slowly, because we had to keep moving out of the way of one elephant family after another. At times we were completely surrounded. I cautioned my clients not to think this is what we will find in Tanzania – where they are much wilder and more aggressive.

But these old jumbos have mastered a very tough life in Samburu, with its extreme climate and long periods of extensive drought. They weren’t going to waste their energy in running from tourists! They’ve learned we’re benign and it was amazing how close the truck got to them!

Finally snaking through tons of elephant we found a place on the river to set out breakfast. As the guys put up the table and chairs and made the coffee, we scanned the river and found four crocs, each about 6′ long, motionless and waiting for next opportunity to add an inch to their size.

What a morning! Together with the Aberdare we’ve seen almost all the rare stuff in Kenya that doesn’t live further south. It’s the fundamental natural history reason to visit Kenya. And for you birders…

The list, I know, is incomplete. But here’s what I remember of unusual birds we saw this morning: golden breasted starling – my favorite bird in Africa. Blue-napped mousebird, confined to a very small habitat here in the north.

The nominate race of the banded parisoma, not spectacular but a wonderful find! The rosy-patched bush shrike, which like all bush-shrikes somehow enjoys life in the middle of a thick bush of thorns. Beautiful, loud songs but the only time you see this one is when it decides to go to a neighboring bush. And then, it rarely flies! It scoots over like a roadrunner!

Fisher’s starling; laughing, morning and emerald spotted wood doves; pygmy falcon, the cutest little thing that you can never see because it flies so fast! The hilarious, weird and spectacular vulturine guinea fowl which looks like its lace blouse is a bit too big a fit and whose red tiara is also too big and slips down its head!

We saw the goofy courtship of the crested and kori bustards. The kori – the second heaviest flying bird on earth – simply looks pretty. He fluffs himself up, stands as high as he can, and … waits.

The male crested, though, can’t contain his urges, though. He streaks up into the air like a rocket, and at about 25′ high exhales a large burp then it looks like he’s been shot out of the sky! Limply, he tumbles to earth, flinging out his wings only at the last second. He glides masterfully to the ground, blinks his big eyes and looks at you as if saying, “Fooled you!”

Neither of the cousins normally does this in the presence of females, so it takes a while.

Dozens of white-throated bee-eaters. They’ll be leaving soon. They nest in the southern Sahara. Crazy looking hoopoes. The bird that would do well on a billboard for a Las Vegas casino: the red-and-yellow barbet. Larks, pippits, wagtails – good grief, I can’t remember them all.

So Kenya now comes to an end. Tomorrow we join our fellow travelers in Tanzania. Stay tuned!