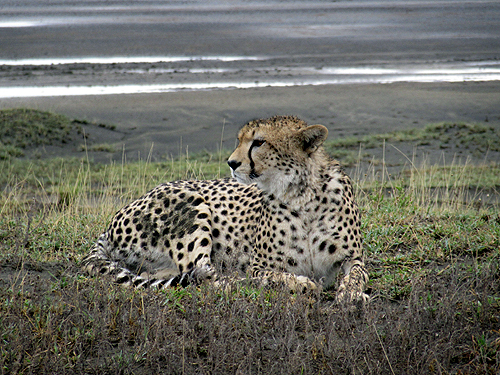 The quest for the big herds of the great migration began as we left Olduvai Gorge and crossed off-road past Shifting Sands onto the Lemuta plains.

It will not be easy this year. The veld is unusually dry, although just in the last few days heavy rains have been falling over the scorched veld.

In the first part of our Lemuta plains journey we saw hardly a handful of Grant’s gazelle. We past several dead cows with Nubian vultures nearby. For some reason there were hundreds if not thousands of Fisher Sparrowlarks jumping across the desiccated landscape.

Just opposite Lemuta mountain where we put lunch on a kopjes we noticed there were many Maasai cows in very large herds scattered across the veld. As we got closer to the kopjes you could see Maasai “flags” (pieces of blue cloth stuck from a pole) claiming almost every kopjes that looked good for a picnic. 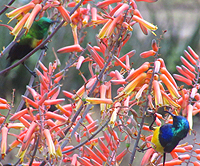 We finally found one that wasn’t claimed and drove our vehicle around for security, then I popped out and walked around it. Lots of agama agama, some northern wheatear and Fisher sparrowlarks, but nothing else.

As we set lunch two Maasai crossed the veld and sat down on some boulders politely 20 yards away. I told my clients about current Maasai travails, quiet apart from the weather, including the proposed forced eviction of 4,000 from Loliondo.

Tumaini – who is Maasai – invited the men closer to our picnic area and they moved in quietly.

The Gibb’s lunch was spectacular as usual, and I told everyone before compiling the left over food to make sure to remove any chicken. Traditional Maasai believe eating fowl is satanic. 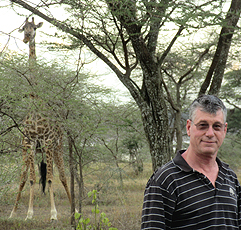 I then walked over to the two men with Tumaini, and we gave them the boxes of a substantial amount of uneaten food.

They were extremely grateful and several clients shook their hands warmly. Their gentle thank-yous were not in English but clear nonetheless. I told them – in Swahili which Tumaini felt they might understand – that I was specially happy the rains were coming.

That evoked robust nodding and lots of remarks that I couldn’t understand.

We then headed west towards Ndutu. There were a few more animals, but despite the Maasai’s protestations that they were being besieged by hyaena, we saw none. Likely the Maasai were not too kind to a visible hyaena, and we saw at least a half dozen other herds on our hour or so westwards journey.

In fact, we probably saw more cows than animals (except for gazelle, of course). Although the veld was dry, there were many pools of water, and the skies were ominous. I think the Maasai know the rains will continue, now.

We ended the day at my favorite lodge, Ndutu. Eva and Aadje were both there to greet us and Eva gave my group a short history lesson about Ndutu.

The next morning our dawn game drive encountered a female cheetah that was hunting. We stayed with her for several or more hours as she laboriously but unsuccessful stalked some Grant’s gazelle.

In the afternoon we braved the wet roads and went into Hidden Valley, a remarkable depression in the Kusini Plains west of Naabi Hill, in search of a giant python reported to be there. We found no python, but we did encounter another cheetah on our way back.

It’s been a beautiful two days at Ndutu, one of my favorite places in Africa. The herds have still alluded us, but the drama and brilliance of the returning rains was exhilarating.

Stay tuned, now, as on our final two days we search for the great herds! 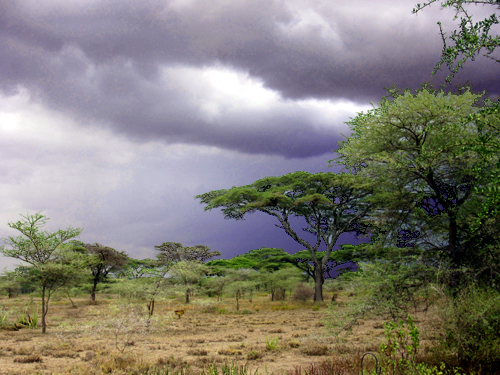