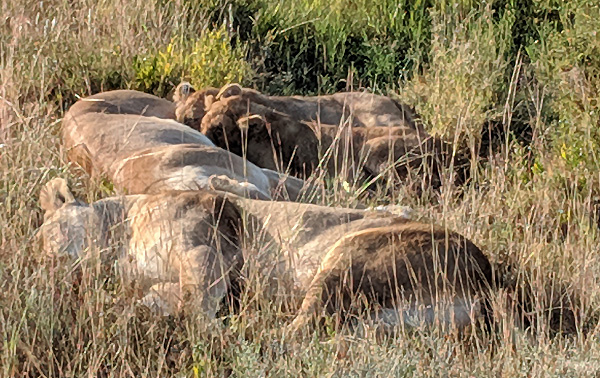 We were ready to leave the crater at the end of the game drive when Tumaini noticed far away near the down road a huge group of wilde running down the side of the escarpment.

We stopped and turned around and with my binocs I could swear I was in the western corridor watching a couple thousand frantic animals in their endless search for better grass. But we were far, far away from that place.

Normally, for at least 35 of the 45 years of my guiding here, the great migration of 1½ million white-bearded gnu (wildebeest) along with a half million zebra or so would at this time of the year be in the far north of Tanzania preparing to cross the river boundaries into Kenya’s Maasai Mara.

In fact it was a great embarrassment to the President of Kenya, recently, during one of the country’s most important celebrations, Madaraka Day on June 1.

Kenyatta went into a not friendly part of the country to the large town of Narok to deliver a rousing patriot speech.

His speech writers got it correct, but when he repeated the welcome to all the dignitaries and citizens who had gathered to hear him, and then added that he welcomed the thousands and thousands of animals traditionally in the Mara near Narok as well, it was a grand political faux pas.

The animals weren’t quite as patriotic as the people or dignitaries. They’re late!

In fact, they’re about a month late, and probably intensely fractured into smaller groups as the one we noticed in the crater. Where this group of migrating wilde were would normally be a scene for early May!

But the crater had rain, and had grass, which it shouldn’t have now, and the southern Serengeti where we’ve been for the last two days is dry as a bone… as it should be. But that group that somehow didn’t get across what is now a near desert has been captured in a small area of intense rain.

Small areas of intense rain didn’t happen in years past. Just like cyclones and windstorms and flooding that was never experienced before.

I don’t know yet if the animals and birds will be able to adapt any better than we as humans are. My intuition says they will, but we’ll have to wait a bit longer to see.

The last few days we’ve been in this dry-as-a-bone near-desert area near Ndutu. The benefit is that it’s really easy to find and watch cats.

On our first game drive we headed straight to the Big Marsh of Lake Masek knowing that lion prides lived there and that even in this dry time there would be water.

The water isn’t just for the lions but for the handful of other animals that remain. Zebra, even wilde, hartebeest and lots of smaller animals like impala and warthog are resident here and don’t migrate. In the good times they fatten up and in the bad times they get very skinny and weak…

…perfect targets for the predators!

Right away we saw two almost fully adult females drinking from the swamp with extended bellies that gave away their successful hunt the night before.

We followed and followed them until they gave us the direction to the bigger pride, and what a prize!

Altogether we found 19 lions with 14 cubs in three sets starting at about 3 weeks old! They were on the side of a big ditch and they kept fighting and playing and tumbling down and struggling out. It looked like a kindergarten out of control!

It was wonderful to see. But most of these cubs won’t survive. As the dry season continues for at least another 5 months, the mothers will harvest most of the animals that remained behind. But that’s normal.

The migration, that’s another thing. It’s not normal and more about that as we continue for four more nights into my favorite place in the world, the great Serengeti!