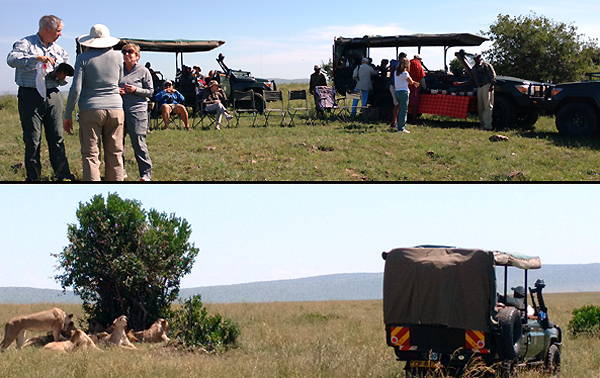 The man who organized the safari I’m guiding has been with me eight times. Only four others of the 12 people have been to Africa before, and Steve had a list of favorites that he wanted to share with his close friends.

We began in Samburu, the Great Northern Frontier, at a spectacular lodge on a high cliff overlooking 200,000 private acres adjacent the Samburu National Park. All East Africa’s very rarest wildlife and birds are found here, and we saw almost all of them:

The reticulated giraffe is in my opinion the prettiest of the giraffe species with very dark markings clearly delineated unlike the starbursts of his cousins. The very weird Grevy’s zebra actually looks and behaves more like a donkey than a zebra. The blue-legged Somali ostrich was just getting his beautiful breeding colors.

And for birds we encountered several times my favorite bird in the world, the golden breasted starling. But the list of fantastics hardly ended there: rose-patched bush shrike; red-, yellow-, grey- and vander Decken’s starlings; and the most amazing big bird of all, the vulturine guinea fowl.

And, of course, we saw lion and leopard, elephant, gerenuk, impala – you name it.

We then flew ecosystems away into Kenya’s finest game park where we’re ending our last day, today.

Fifteen degrees cooler, the Maasai Mara is the wettest place in East Africa, and that’s why it’s so packed with wildlife. We left before dawn in the morning with a scrumptious hot breakfast carried as a picnic, then spent 7-8 hours out on the veld finding numerous lion (I lost count at 25), tons of zebra, hartebeest, topi, impala and today, cheetah.

One of my personal favorite moments was when we spent some time with “resident” wildebeest. Virtually all of the 1½ million in the migratory wildebeest herd are in the southern Serengeti, where I expect to see them in about a week.

Why were these here? With the patience of sticking with them long enough to figure it out, it became clear there were yearlings of an unusual age, very old males and some with pretty bad but now healed injuries.

All reasons that they were unable to join the herds when they left the Mara last October.