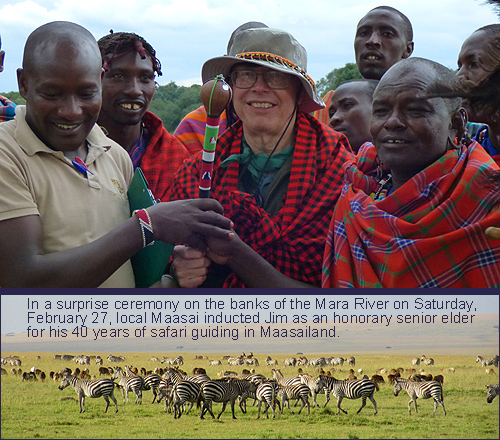 Our three days of game viewing in the Maasai Mara proved this is the most exciting place to experience extraordinary drama in Kenya.


Many of the best wildernesses of East Africa are inextricably linked to the Maasai people. The three days of exciting game viewing in Kenya’s Maasai Mara impressed me especially for the simple fact that local Maasai have allowed this wild and wooly place to continue to exist.

Our nights at Governor’s Camp were not peaceful. Screaming baboon, howling hyaena, fighting elephant, roaring lion and grunting leopard even woke me, and some of my clients were actually concerned their first night or two.

As throughout all of northern Tanzania and very southern Kenya, there are too many elephant, and too many means more fights among them, day and night. We suffered two mock charges, one by a collared male that had been relocated after harassing residents of Nairobi.

The salient just outside Governor’s Camp is peppered with lion. We had the remarkable fortune to watch a three-day saga that began when a dead hippo “popped.”

Nothing kills or really wants to eat hippo. It’s too big, too fat and the hide, too thick. But a giant one of probably 3000 pounds or more died on the banks of the Mara River just outside Governor’s probably a few weeks before we arrived.

It ripens and then pops. It did so when we arrived, and we watched several giant crocs open “tunnels” into the fermenting beast.


They didn’t get much to eat before one of the local lion prides displaced them and began gorging on the meat deep below the hide and fat that was finally available.

That drew hyaena and the hyaena drew birds and for the next two days we watched an endless drama of dozens of lions feasting and fighting and fending off literally 30 hyaena, not to mention the 14-foot crocs at river’s edge.

When the lions could just not stuff down another morsel, most of them went away, but as lion prides are want to do, one remained behind stuffed to the trimmings to “guard” the kill. She managed this for almost a day before submitting to her own need to sleep off the gluttony.

The hyaena pounced on the remaining carcass screaming and laughing and seriously fighting with one another. Vultures grabbed bits of meat and fat out of the air that were being flung from this giant holiday meal from hyaena completely inside the carcass!

That, my friends, was only one of dozens of exciting experiences this amazing reserve afforded us all. Quite far from Governor’s at Double Crossing we watched three lions stage a hunt of warthog from start to finish, leaving their 4 four-month old cubs sitting in a line about 5 feet from our cars.

We saw the most amazing assemblage of animals: topi, hartebeest, wildebeest, giraffe, waterbuck, eland, Grant’s and Thomson’s gazelle and probably others I’ve forgotten, strung across the unbelievably beautiful rolling hills of the Mara.

We watched the giant martial eagle attack guinea fowl. We saw two male impala sadly stuck together at their horn after a vicious fight. We watched hundreds of buffalo stampede through the waving tan oat grass, white egrets flung about them like fluff exploding from a pillow. We saw a mammoth hippo start to attack a Landrover.

And we watched amazing bird events, including maybe a thousand Abdim storks take off for their return journey to Europe easily circling up six or seven thousand feet in all but a few seconds.

It’s breathtaking being in The Mara. Always has been and always will… if the Maasai say so. Because all around the Mara are Maasai farms and businesses. We saw them. We followed a wild black rhino out of the park onto their land.

Running a farm or a small shop or teaching in school with too many elephants outside and lions threatening your livestock isn’t easy. Tourism and its benefits manages a fragile balance with this tolerance.