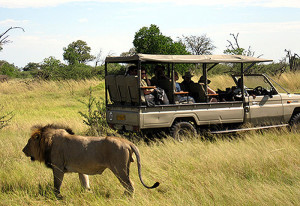 The rains returned! There’s no way of predicting for how long, of course, or if the serious deficit in moisture will be significantly reduced, but the two days of thunderstorms in my opinion was the reason our game viewing ended so well.

We ended our Botswana safari with three days in Moremi, our third ecosystem after the Kalahari and the Delta.

Moremi is Botswana richest game viewing area. Much of it spills into the Delta, and it includes the large Chief’s Island in the middle of the Delta. We were near the Xaxanaka gate, pretty much in the middle. 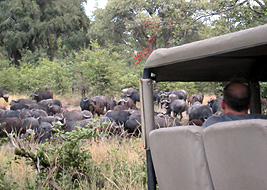 Two game drives daily netted us 9 lion, a leopard on a kill, a giant family of buffalo and about two dozen elephant.

The circuit that brought us to the lion went through thick mopane forests and shorter thick bushlands so typical of central Botswana. This makes game viewing difficult, but when we emerged onto the edges of several ponds we found good game.

Kudu, sassaby, impala, giraffe zebra and wildebeest were also seen on this single game drive. The giraffe here, by the way, seem to be bulkier and have a boxier face than those I know so well in East Africa. Their coloration was radically different from individual to individual, from near powdery white to nearly black.

What was also interesting was that the coloration of the giraffe did not completely follow the rule of thumb that the older males are darker. There were old white males and dark females.

When coming upon one pond, we watched a massive hippo jump out into the adjacent forests, scattering three good-size crocs.


Earlier we saw a marvelous family of buffalo, probably numbering close to 50, with quite a few youngsters and several very young babies. They were on and around a ridge of stunted bushes surrounded by a sea of high oat grass. The afternoon light provided an absolutely beautiful canvas.

It’s been hot. My thermometer registered 103F for each of three days at between 1 and 2 p.m. Everyone would be sleeping, relaxing or swimming then, and by sundowners it had cooled down considerably, especially because (fortunately) the rains seem to be returning. By dinner we were in the upper 80s.

We saw so much damage in Moremi from the radical climate swings of the last few years : from horrible flooding to near droughts. Large stands of old trees had been killed. When the delta raised to unnaturally high levels in heavily forested areas that hadn’t seen water for decades, it created a thick alkaline froth.

On our last evening together there was much celebration of the trip’s success. Many of the non-veterans said the game viewing exceeded their expectations. From my perspective, the game viewing was a bit slow until the last day, when the game drives really delivered.

Also in my opinion, the real prize of the trip was the Pell’s Fishing Owl. I’ve only seen it once before – in the Delta – and not as close as we got this time. Although I didn’t see one, others in the group did get a fleeting glimpse of a sitatunga, the extremely unique water antelope with webbed feet.

So in spite of a serious lack of rain that preceded our arrival, and fires that besieged much of our actual trip, I think it’s fair to say Botswana performed well for us. Of course much in the wild is simple chance but that’s part of the exhilaration!

For some on the trip, now, it’s on to VicFalls. To others, they’re returning home. And for me … to East Africa! 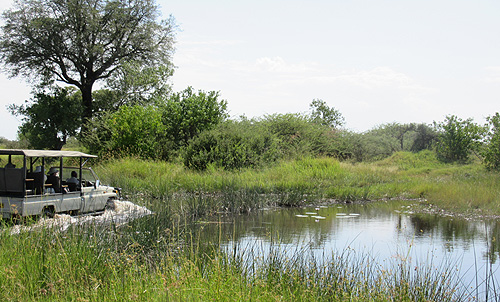