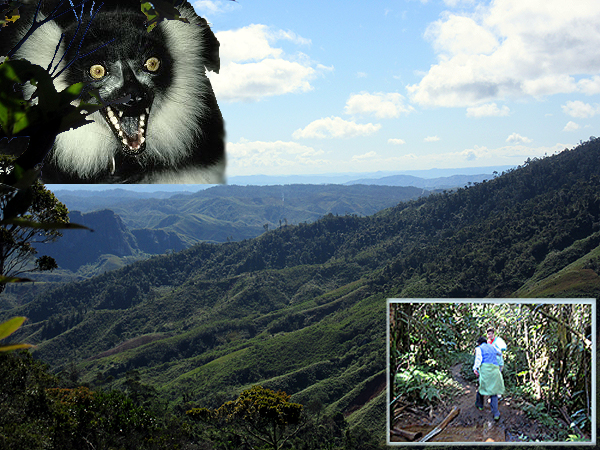 We’d seen up-close and personal the pointy nose black-and-white ruffed lemur. In fact, they jumped on our backs and ate out of our hands! But now we wanted to see them in the wild. This would be a challenge.

Virtually all tourists to Madagascar see lemurs in private reserves, as we did at “Lemur Island” in the east, or as many tourists do in Berenty in the south. These aren’t wild lemurs. They are as domesticated as circus animals. To see our pointy nose black-and-white was going to take some extraordinary effort.

Three of our group decided to stay back. As the rest of us were bumping along in our two SUVs everyone was quietly calculating the difficulties that lied ahead, remembering our guide’s admonition that the black-and-white are among the most difficult to find in the wild.

Quite a few of the 112 lemur species readily tolerate observers in the wild, and quite a few of those live in the mid- to lower canopy. The trademark ringtail, for example, even spends a good amount of time on the ground! But our target, the elusive black-and-white, doesn’t habituate to observers in the wild, and it lives at the top of the jungle canopy!

About an hour into our drive one of our two SUVs broke down. We started to walk rather than wait for the repair which might never happen.

It was uphill as expected, but trekking in the rover tracks was pretty easy. We weren’t in the primary forest, yet. We had great birding. The ubiquitous souimanga tweeted all over the place, great syncopation for the bulbul’s masterful variety of song. It was really like a concert in the woods.

And we saw our first blue pigeon! Not quite as magnificent as the blue coua, it’s still right up there among Madagascar’s beautiful avifauna: sort of like a large blue softball! And as we were photographing it the very rare velvet asity jetted down in front of us into the deep forested canyon below.

So on we went. We finally entered the primary forest along a path on the top of a steep hillside, catching spectacular views of the jungle sweeping down into the deep canyon. As we moved into the forest the clatter of bird song slowly subsided.

At first all we could hear was the swish-swish of our steady pace on the soft jungle floor as we brushed through thickets of giant ferns and pushed multitudes of weird looking vines out of our faces. But as we penetrated the jungle further and further the scarey, other worldly cry of the king of the lemurs, the indri indri, resounded all around us. It grew louder and more frightening as if increasingly warning us not to continue.

The indri indri knew that their heart-stopping screams would scatter through the jungle in a thousand echoes, conjuring their presence like specters appearing and disappearing in the small tunnels of sunlight that flashed over us we moved through an opening in the canopy above. I couldn’t help again but remember that the first explorers named them “lemurs” because the word is a derivative of ghost in Greek.

Things got a bit rough. The path was little used and slippery. We wanted to look around us but had to watch our feet. Susan was worried we’d encounter one of the common ground boas. I saw several of the giant hammer-head worms, actually leaches. There were purple and orange mushrooms. Gargantuan, twisted roots thrust out of the ground tripping us. Everywhere we had to hop over trees felled by the March hurricane.

The forest closed in on us. The indri indri’s screaming seemed to come from everywhere at once, almost as if they were affronted we wouldn’t stop to find them. But the king of lemurs is found in many places; we’d already seen him in the wild. What we wanted was the elusive black-and-white.

Pandanus, ancient giant ferns, ground orchids, gargantuan lianas and travelers’ trees threw shadows on shadow until it seemed very dark and cold. Finally the screams of the indri indri subsided. We were too high for them, now. The heavy humidity with water dropping from the canopy made the path seem to undulate like a wave in the ocean. Finally we emerged onto the edge of our jungle mountain. It was breathtaking:

Primary forest rolled under the blue sky for as far as the eye could see. Hillsides were like distant rugs of green. We were all sweating seriously. We turned back into the forest: the path got steeper and smaller, the forest bigger.

We reached a crosspath curiously labeled “Quatre Chemins.” Then out of nowhere another local guide emerged all smiles and ready to take us to the quarry! He had been there since early morning locating the troop of elusive black-and-white ruffed. He was obviously elated with success. I was exhausted. I was at least ten years older than the other five.

We literally slid down one deep ravine and then tip-toed over logs thrown over streams only to have to climb another hillside. I finally aborted. It was a first for me. I’m not ashamed. Age does it. I’ve seen more of Africa than most explorers. I wandered back down the trail on my own at a greatly reduced pace, confidently sending the three local guides with the remaining five.

I had magnificent birding, now that I was alone. Three different kinds of vanga circled around me. I watched the courtship of a paradise fly catcher and at one point a blue coua seemed to practically land on my head!

Meanwhile, the core of our group scaled the last nearly vertical hillside, pulling themselves up by the roots of the jungle. Cathy slipped and gave everyone a start, but she was an incredible trooper and also made it to the top with the others.

Little can compare to Madagascar in the wild. Isolation for millions of years has created an ecology unique to earth. It’s an important trip for anyone who truly wants to understand the wilderness of our planet.

But Madagascar isn’t easy to do. Accommodations are poor. Urban areas are congested, impoverished and polluted. Roads are horrible. Its airline is notoriously inadequate and unreliable. Finally, to fully appreciate how wild this place is, considerable physical exertion is required.

Virtually all visitors to Madagascar see a variety of lemurs in private, contained reserves.

But Daniel and Roger Pomerantz, Cathy Colt, Susan Zaneti and Chris Zirafi saw them in the grand, primeval forest miles from everywhere. They persevered and struggled physically probably beyond what they thought they could do. But I know how they feel having made it. They’re among the very few who stepped into the very distant natural world of the elusive black-and-white, experiencing wonders most of us will never will.