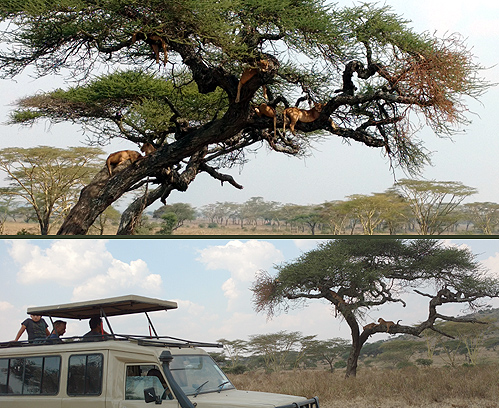 Cats dominated our first few days of game viewing. On only four game drives we’ve racked up 34 lions, 6 cheetah and one leopard.

Lion aren’t doing well in Africa. Nearly a third of the population has been lost in the last decade, and we experienced first hand one of the reasons why.

Our first two days were spent at Ndutu Lodge in the very southwest of the Serengeti, only a few kilometers away from a rather highly populated rural area of ranching Maasai. Over the years Maasai have become much more sophisticated businessmen, using vitamins and antibiotics and modern farming methods.

During that same time tourists have increased and on the other side of the great wildernesses, Africa’s dynamic cities and towns are exploding with population and industry.

This is the dry season. Virtually all the great herbivore herds have moved far north into Kenya’s Maasai Mara where it’s still raining and the grass is still growing. This puts enormous stress on the cats, who have survived for eons through these normal cycles of feast and famine.

But normal cycles have become exaggerated by climate change. It’s wetter and colder in the wet season and dryer and hotter in the dry season. Feasting is now gluttony. Famine is now starvation.

Two days before we arrived a pride of lion killed two Maasai cows. The ranchers vowed revenge and it is this dynamic now dominating the fringes of wilderness areas throughout the entire sub-Saharan Africa.

NGO and field researchers were summoned by the park authorities to try to defuse the situation. Their only weapon is talk. They try to convince the Maasai that the wilderness is essential for a Tanzanian future for a variety of reasons, especially tourism.

And now some NGOs are also offering to compensate farmers and ranchers who loose their stock to wild animals.

So the researcher in charge of our area actually solicited us to travel with him to an area where two lion were mating. The rest of the pride’s members had skedaddled away after their cow pilferage, but a mating pair won’t move for the duration of their 3-day affair.

So we tourists provided not only the cover-buffer against revenge but also an object lesson in the value of lions. These were our first two.

The next day as the mating pair finally moved on, they did so after first killing a Maasai donkey. Not good news.

With such human/wildlife conflict going on in our neighborhood, lions started to appear all over the place. Like in front of our rooms at Ndutu Lodge.

Askaris (guards) were summoned to patrol the area all night long with strong flashlights. Still, the deep throating of the lions and the cries of hyaena following them filled our night.

Today we left the southwest area for the middle of the park. There is a long stretch on the “main road” which is a vast, now desiccated plains which in the rainy season is the verdant prairie. Normally now no cats will be here, because the large herbivores are gone.

But the season has been so stressful, that we found a lioness on the side of the road – in very bad condition – stalking Thomson Gazelle! That’s ridiculous. These marvelous little creatures which don’t need water and eat roots in the arid plains, covered the landscape. But a full grown Thomson is hardly 35 pounds! More to the point, they’re way too quick and nimble for a lion.

The main road got clogged with safari vehicles stopping to watch the lion. It was rather bizarre and comic at the same time. She took no notice of the dozen vehicles hardly ten feet from here as she crouched behind some roadside grass intently stalking the gazelle.

Then two giant road craters came up and I told my group to scatter quickly. It just wasn’t a good situation. The lion was desperate. Even a weak and desperate lion is powerful.

During our later drive that afternoon along the Seronera River we saw 13 more lion and a leopard. Just before we ended the game drive, we saw six lion hanging from a tree as if someone slung giant sausages up there!

It’s always easy to find cats in the dry season, but what we’ve seen is a mixture of the wonderful normal and the really scary abnormal.

There is tension on the veld.